These grants came about from a growing desire from playwrights and ensembles to work together. Ensembles were interested in working with a writer to help craft a story, and playwrights were interested in developing a piece in the rehearsal room with an ensemble of artists. The grant supports collaborations between playwrights and ensembles, and focuses on fostering risk and exploration through the development process. In 2011-12, Andy Bragen worked on Mobro with Santa Fe’s Theater Grottesco, and in 2012-13, Cory Hinkle and Theatre Novi Most collaborated on Brecht’s Brain.

The 2013-14 project, a collaboration between John Olive and Live Action Set, will have its first public performances as part of the Minnesota Fringe Festival July 31 through August 9. It is a “twisted interpretation” of Dostoyevsky’s Crime and Punishment that allows the audience to choose how they experience the performance in the spooky, industrial basement of The Soap Factory. We asked John about the piece and his experience with this collaboration.

How did you get involved with Live Action Set?
My involvement with Live Action Set (LAS) is completely attributable to the NET/Ensemble program at the Playwrights’ Center. I met with Noah Bremer and Joanna Harmon (LAS’s main movers), and we discussed Crime and Punishment in very general terms with an emphasis on video games (of which my son is an active aficionado). When we were notified that we had won the grant, I began meeting with Noah and Joanna semi-regularly (every other month) then more often as the date for rehearsals approached. At some point in this process came the idea that the play would be “immersive,” that is, that the audience could move from scene to scene as they wished (perhaps Noah and Joanna always had this idea).

What has it been like co-creating this show with an ensemble?
It’s unlike anything I’ve ever done. My job initially was to be a balance the requirements of the Dostoyevsky text and what the actors were doing. I was a go-between; I created scenes that came more or less directly from the book and then handed them over to the ensemble. LAS works improvisationally; as they worked on the scenes, the scenes changed, often radically. This is OK, and even so there are many instances (I’ve lost track) when my text remains more or less intact. Now my job is to suss out where actors need textual help and then provide it. Many basic decisions about the play—e.g., not to include a Raskolnikov, to make the play abstract and imagistic—came organically, from the scene work. Again, this is as it should be.

Where did the idea for the show come from and how has it changed during development?
Mainly, the idea came from the nature of The Soap Factory basement, which is dank and dark and basementy. Initially I was saying, “how about Huckleberry Finn?” Then I toured the basement. “Crime and Punishment.” I believe the play became more abstract, more imagistic, with less clear narrative as time passed.

What inspirations did you take from video games?
I believe that immersive theater replicates, more accurately than any other form, the probe-reward vibe of video games. Still, there are major differences; you can’t say, “I’d like to see that scene again” as you can with a video game. There is no straightforward narrative, as there is with most games. Will this be frustrating? I doubt it, but it will be interesting to see what the audience thinks.

Do you have advice for other playwrights collaborating with ensembles?
The basic tenet of “straight” (creepy word, this) theater (“No changes in the text of the play will be made without the playwright’s permission,” etc.) does not apply. If you’re going to have difficulties with that, stay home. But if you want to be involved in the creation of wonderful material, stuff unlike anything you’ll ever be part of, well, go for it.

Where and when can people see the show?
Crime and Punishment will be presented as part of the 2014 Fringe Festival in the basement of The Soap Factory. It opens July 31. Another version, titled Unhinged, will play the same venue in October.

What can they expect?
There is no coherent narrative. The play is imagistic, dark, weird, unlike anything people will have seen. The audience wears masks. Don’t wear fancy clothing.

Tickets and more details on Crime and Punishment at Minnesota Fringe » 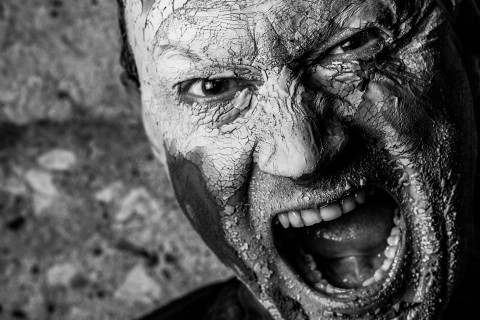