These events are the public components of the development work at the 43-year-old Playwrights’ Center, where around 60 plays are workshopped each year. PlayLabs and the Ruth Easton New Play Series represent the Center’s most intensive play development opportunities for playwrights, allowing Core Writers time to hone their scripts and get audience feedback. The readings feature top local and national actors and incorporate design elements, elevating the staged reading to an intimate art form all its own.

“The 2014-15 season has something for everyone, with genres from hip hop to historical and topics from gun control to gospel music,” said Producing Artistic Director Jeremy B. Cohen. “I’m so inspired by this season’s brilliant slate of diverse playwrights from around the country, and excited to share their work with our standing-room-only audiences. To see the demand grow so intensely for a chance to see this new work—such that we’ve added a second performance to each of the Ruth Easton readings—is a real testament to the level of excellence of our writers, and the hunger of Twin Cities audiences for new American plays.”

All events in the Playwrights’ Center season are free.

For more than 30 years, the PlayLabs festival has been energizing playwrights and wowing audiences. Over 75% of the plays featured in PlayLabs over the past decade have gone on to production, such as Dan O’Brien’s The Body of an American (Portland Center Stage), Allison Moore’s Slasher (Humana Festival), and Mat Smart’s The Royal Society of Antarctica, which was developed at PlayLabs 2013 and will premiere at Chicago’s Gift Theatre in March 2015.

PlayLabs is one of the nation’s most intensive play development programs, giving playwrights 30 hours of vital workshop time with a team of collaborators, and two public readings with time for rewrites in between.

PlayLabs 2014 runs October 20-26 at the Playwrights’ Center. In addition to the three featured plays, audiences are invited to a showcase of work by the Center’s playwriting fellows and a Saturday night party. All events are free and open to the public.

The 2014 PlayLabs festival will feature Cocked by Sarah Gubbins, The Absence of Weather by Ken Urban, and Le Switch by Philip Dawkins, all Core Writers at the Playwrights’ Center.

This season, the Ruth Easton New Play Series is expanding from one reading of each play to two. Five new plays by Core Writers will be featured between December and April. Participating playwrights receive 20 hours with collaborators to workshop their script—to write, rewrite, experiment, and shape their work.

The 2014-15 Ruth Easton New Play Series will feature Forget Me Not When Far Away by Kira Obolensky (local writer), Dust by Qui Nguyen, Marie and Rosetta by George Brant, The REALNESS: the second break beat play by Idris Goodwin, and Romeo & Naomi Ramirez by Kathryn Walat.

We are taking reservations for PlayLabs; reserve your seats online or contact the Playwrights’ Center at (612) 332-7481 or info@pwcenter.org. 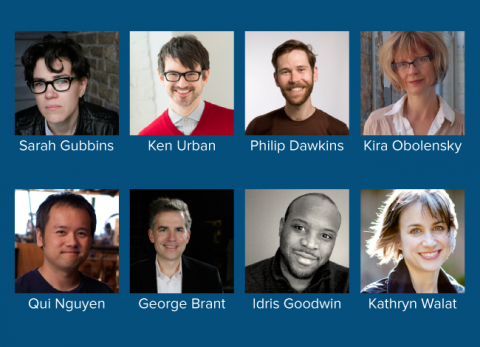