The Playwrights' Center's 2014-15 Ruth Easton New Play Series continues February 2 and 3 with Marie and Rosetta, a new play (with music) by Core Writer George Brant. Associate Artistic Director Hayley Finn talked to George about the play and the women who inspired it: gospel greats Sister Rosetta Tharpe and Marie Knight.

What about the life of Rosetta Tharpe compelled you to write this play?

Partly the idea of this person who was so ahead of her time, who we really don’t know about today. She’s not so much in the national consciousness as someone like Mahalia Jackson, who was a contemporary of hers.

I think part of what appealed to me about her story is definitely her transgressive behavior, which is what got her in a lot of trouble and resulted in her disappearing from the nation’s mind a bit. She was brought up in the Pentecostal Church, playing music starting from age four in services. As she grew up and became a musician she faced—as a lot of musicians who were raised in the Church do—the decision to continue with the spiritual music or go into the secular world. People like Sam Cooke and Al Green play with that.

She’s someone who tried to live in both worlds, and she really pushed the boundaries of what the Church found acceptable. She would go through these periods where she would be exiled from the Church in some ways. Some people would turn their backs on her because she’d done something—like singing at the Cotton Club—that they objected to, but she always found a way to get back in. She went back and forth quite often and I found that interesting: why she felt she needed to both break out of the Church and return to it. When anyone asked, “Why are you playing in a nightclub?” she would reply, “You’re gonna find more sinners in a nightclub than in a church.” She saw herself as evangelical, someone spreading the Good Word.

The Church questioned how sincere she was in her belief, saying there was no way that she would ever have sung in the Cotton Club if she was truly religious. She found these ways of playing with that, where even though, yes, she’s playing in a nightclub with a big band backing her, she’s still dressed very conservatively with a long dress up to her chin. There are a few videos of her playing in the club and when it’s time for the instrumental part of the song all these dancing girls run on who are wearing almost nothing. You really get the contrast of how she stayed very proper.

So it’s her transgressive nature, that’s definitely one of the things that appeals to me about her. And transgressive even in just the fact that she played guitar, which is not traditionally a female instrument per se. Even now, you can’t name too many women who primarily play the guitar, and here’s someone who is not only doing that, which is kind of a rare thing, but doing it in the Church and playing it as really a solo instrument, which is steeped in blues and jazz. She was playing with gospel music in the way that Ray Charles did decades later, really pushing gospel music to a different place by adding this swing to it. They even called it, eventually, Swinging Spirituals. She pushed the boundaries of what’s acceptable musically, so she’s really transgressive in that way, too.

And always with a smile on her face, kind of a coy “oh, did I just do that?” style about her that made it very hard for someone to condemn her for it.

In addition to Rosetta, the play features Marie Knight. Can you tell me a little bit about how she fits into the story?

Rosetta had many different musical periods in her life, because she stayed a practicing musician her whole life. She played wherever people would take her. The crowds got smaller but she kept going. So it was a long life, and I didn’t want to feel like I had to get her entire life into one play. That can be biting off more than you can chew, decades in an hour and a half or two hours. So I looked around for one particular time that I really enjoyed and where I thought there was dramatic potential, too. The period where she sang with Marie Knight is my favorite of her recordings.

Marie came into Rosetta’s life in 1946. Rosetta had just come off of singing in nightclubs, and Marie had a much more traditional sort of gospel voice, a contralto, and was quite proper in her demeanor. She had this kind of “true gospel” voice whereas Rosetta was maybe more a shouter and played with things a little more. Marie was more staid in her approach. Rosetta spotted her one night singing with a gospel group. Marie was quite beautiful and her voice was quite beautiful, and I think both of those things appealed to Rosetta. She was looking for someone who could get her back in the good graces of the Church again and she found that in Marie. That very weekend, Rosetta invited her to join her on tour. And on this tour they created this beautiful music together where they’re both singing full out, which I really find fascinating. It’s not a case of Marie just sitting in the back adding harmony; they’re both just going for it and weaving in and out of each other’s harmonies in an amazing way with such energy and joy. So the music was one thing that drew me to this period, because it is my favorite. Marie played piano and Rosetta guitar, and the two of them went out into the world and toured together—just these two women, who had both been divorced at this point and had some hard events happen in their lives, and I think they found some solace with each other. So I was very intrigued by that period in particular.

How did you decide upon the songs you selected for the play?

That’s a process that’s still brewing, still developing, because there are all these great recordings and it’s difficult to choose which songs to use. One thing I’m thinking about is how Marie and Rosetta move from two separate people to one unified sound, and what are the right songs to demonstrate that progression. Within that macro view there are many threads to the musical journey. One is simple variety—what instruments are they playing and what haven’t we heard yet? The electric guitar gets brought out a little later, because once you throw an electric in it’s hard to go back. I’m also looking at which songs contribute to the story the play is telling. The conceit of the play is that they’re rehearsing for their first time playing together. So really the only audience is each other; they’re not playing out to the actual audience. I’m intrigued to see how that works and if it works. In the workshop last year at the Playwrights’ Center I found it interesting because you feel almost like a fly on the wall, just hearing these two people figure out how to accommodate each other and how to play together.

When you first brought the piece here last year it was in its early stages of development. What did you learn from that workshop?

At that point there were maybe thirty pages of the script. The first day, we read the play—what existed of it—and talked for a while. It was an experience where I really felt inspired by the actors (Ivory Doublette and Christiana Clark) and the director (Wendy Knox) and just hearing the play out loud, which I hadn’t up until that point. It really pushed me to want to finish it and to continue the story. So it was a very productive time. In between the workshop days I did a lot of work back at my hotel room having been inspired by the process that day. I think I added another ten pages and reworked the existing thirty. It was a fantastic couple of days, and then after that I really wanted to finish the play.

Now that the play is much more complete, bringing it back to the Playwrights’ Center for another workshop is something I’m really looking forward to. I’ve had some ideas recently I’d like to try out, and I think it will be a very productive time.

Your play Grounded is a one-person play, and Marie and Rosetta is a two-person show. Are you attracted to writing for small casts?

I try to find the essence of a play and what characters are absolutely necessary to tell the story. In this case it really feels like two. Hearing the two of them play music for one another felt very intimate, and I do think there’s something about a smaller cast, which creates that space to a certain extent. I know with Grounded, definitely, if the play’s working you feel very connected to the one actor and it becomes a very personal relationship. This play is different from that; the characters aren’t actually paying attention to you out there in the seats. But there’s something about that intimate nature of a small cast that I definitely do find appealing.

Reserve your free tickets to Marie and Rosetta » 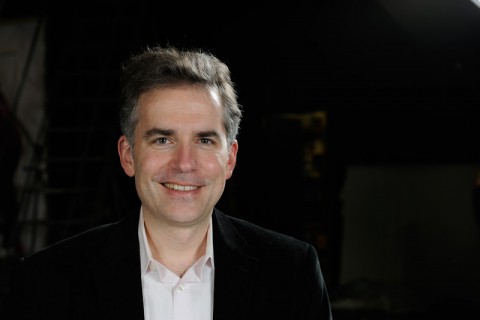