The Playwrights' Center's 2014-15 Ruth Easton New Play Series continues January 12 and 13 with Dust, a new play by Core Writer Qui Nguyen. Associate Artistic Director Hayley Finn talked to Qui about Dust and the other plays he is working on, how he collects stories from his parents, and what he'll be focusing on during the Ruth Easton workshop.

What inspired you to write Dust?

It’s inspired by a New York Times article I read years ago about Amer-Asians and the number of “leftover children” that have grown up in Vietnam since the war’s end. Many of them looked dramatically Caucasian, which I found interesting since there was no hiding that they were “soldier babies.” I wondered what that would mean for them growing up in Vietnam and then later how they’d be taken in if/when they came to America. You look “American,” but you’re culturally Vietnamese. There was an immediate empathy since I felt very much the opposite of that growing up. Aesthetically I’m Vietnamese, but my personality—my insides—are very much shaped by the movies, video games, and pop-culture of my very All-American youth.

Arkansas is where you grew up, right?

Yes. The play is actually set in my hometown of El Dorado, Arkansas. So when they reference places like Country Club Terrace, Rogers Junior High, and The Tac House, those are real places in my childhood. When they talk about East Main Diner, that’s my mom’s diner.

So you wrote your mom into the play.

There’s a reference to her.

Does she get a cameo all your plays?

Lately she’s definitely appearing more and more in my work. As well as my entire family. I’m currently working on a five-play cycle about my parents’ marriage and immigration to the States beginning in 1975.

How do your parents feel about that? Or have you not told them?

Though my parents know that I’m writing about them, they haven’t read anything that I’ve written about them so far. When I first asked them about their lives, they were really hesitant to tell me any of it. Not because I was going to write about it, but because I think it was just, you know, they didn’t want to go into sad stories about the war or funny stories that would compromise their position as my parents.

And then last year, I started to change my tactic: instead of asking them about them, I said, “Hey, I want to write this general kind of story about Vietnamese people in general. It’s not about you, I swear. It’s a general Vietnamese story. But the more specifics you can tell me about your own experiences, the richer my characters can be. So please be very specific. Again, it’s not going to be about you though.” Which of course was a complete lie. So then they started telling me stories, because they didn’t feel like they were the ones under the microscope.

Of course, what I didn’t realize was that their more private stories, specifically about them dating and their marriage, would end up sort of wigging me out because I’m their kid. Seeing me squirm tickled them, so once they realized there was a joy in, you know, grossing out their son, they then started becoming really open about all their stories. So I just collected a lot of information about them.

It’s all motivated by the fact that I now have two sons. Before their birth, I didn’t dive too deeply into writing about my identity—cultural or otherwise—beyond the movies, music, and comic books that I loved growing up. I never really thought about where I came from, the history of my parents, because I just bought into the fairy tales that they told me about themselves. And now, as they’re getting older and as I have kids, I feel like there’s a legacy that I owe to my family—both to the generations before me and the generations to come. I want Sam and Felix (my sons) to know where they came from and relatives such as my own grandmother, who they will never meet because she passed away before they were born.

Beyond just my personal motivations to record and tell these tales, once I started to hear my parents’ stories, I realized that they were stories I had never seen onstage or in any media. There’s a specific narrative that people are comfortable with telling about the Vietnamese people, and it dawned on me that maybe this is my new mission as an artist. When I was in my twenties, I was driven to tell all these geeky stories of sci-fi battles and zombie attacks and samurai showdowns—to make theater for those who don’t go to theater. Now, in my thirties, I’m finding a new mission alongside my old one: to change the narrative of the Vietnamese paradigm, to illuminate their stories, but most importantly to bring the sex appeal of my Vampire Cowboys work into the work I’m now writing about my own cultural background. I want to make it clear, just because “the geek’s getting serious” doesn’t mean he’s gonna be any less entertaining.

What are some of the questions you’re tackling in Dust?

The thing that interests me in Dust is the face that we want to show the world versus who we really are when we’re alone. All the characters in the play have secrets that they are hiding from each other. The dad had the affair in Vietnam. The mom is having a current affair with her old lover. Thuy has a shady past, but she’s trying to pretend to be the “Model Minority” when she gets to America. And the alpha-male jocky brother is gay, but no one knows that. So they’re all trying to hide these secrets, trying to be something that they’re not. And I think that that’s personally something that’s very relevant to what I’m going through in my own life right now. So how do you deal with those secrets? How do you deal with figuring out how your real identity versus your ideals match up when they don’t?

Are there things that you’re looking to work on through this workshop process?

There’s a lot more depth to be mined from all the characters. I also feel like the “theatrical-ness” that I usually employ isn’t present yet. Right now, it’s a pretty realistic play and I’d like to figure out how it can still retain all the honesty it has but also have more visual fun. I always worry that when you come to see a Qui play you have a certain expectation about what I’m doing. And if you were to come and walk into Dust, I think in its current draft you’d be like, “Uh, what happened to all the cool stuff you usually do?” I want to be sure that that’s there, as well as a story that’s maybe a little different than what I usually write about. So those are the two things that I’ll focus on in the workshop: character story and theatricality.

Is it a lot to live up to? The “Qui-ness,” your signature style? Is that challenging?

I do think about it, especially in New York. It’s both the blessing and the curse of having people who follow my work closely and want to see it. On the one hand it’s very motivating that there are people who are constantly sending nice messages like: “When’s the next show? When do I get to see it?” That’s definitely motivating. But there’s also the pressure of, “I have to live up to what I did before. I have to make it bigger, bolder, find different angles that they haven’t seen.” So it’s both pressuring and motivating. But, ultimately, I think it’s all good for my work in the long run.

Who or what are some of your influences?

However, those are the fancy names—the household names—but in reality I’m far more influenced by my peers. I’m much more shaped by Aditi Kapil and Lloyd Suh and A. Rey Pamatmat and Mike Lew and Kris Diaz and Carla Ching and Mona Mansour and all the Resident Artists of New Dramatists and all the Core Writers of the Playwrights’ Center than any of my idols.

I think when I was much younger it was definitely the writers I was reading and seeing on the big stages, but now it’s more the people that I’m always in the room with, hanging out with, sharing coffees with, than the people that I used to look up to. Not that I don’t still admire the Hwangs and the Stoppards and Kushners of the theatrical world, but there’s more relevance to me in my life when I’m talking to Kris Diaz when he’s in the room asking out loud something like “how do I write and raise a kid at the same time?” Those are the questions and the people in my life that really shape my writing.

Reserve your free tickets to Dust » 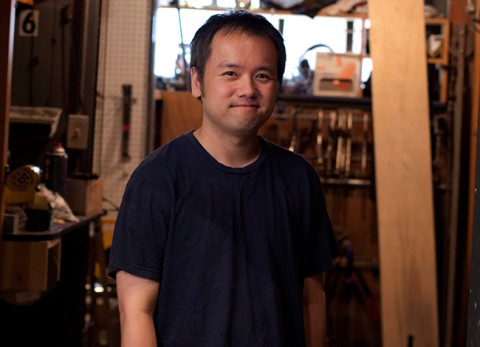