In addition to a $25,000 award, the McKnight Theater Artist Fellowship provides up to $7,000 in development funds for each artist to begin building a new theatrical work with collaborators of their choice. The 2016-17 McKnight Theater Artist Fellows Sonya Berlovitz, Thomasina Petrus, and Kimberly Richardson will showcase these works in progress on Monday, June 26 at 7 p.m. at Mixed Blood Theatre. Reserve your tickets here »

Get to know the artists a little with these mini-interviews:

What, in your experience, makes a successful collaboration?

I look for collaborators who challenge me to be the best I can be and someone who sees my contribution as essential to the shared conversation about what works and doesn’t for the overall production. A successful collaboration is one where the director and other designers are willing to join together in challenging traditional boundaries and conventions.

How does your process work?

The design of the show grows out of conversation, collaboration, and cooperation between performer, designer, and director. Does the silhouette I am creating work with or against the production? Do the color and textures give the right emotional punctuation? Does it give a potential audience member, or me, fresh insight into the character and the play?

My goal is to find a costume’s silhouette—architecture so to speak—in order to enhance each character that the actors are trying to portray. By creating poetic juxtapositions through design, my intention is to give an unconventional shape to the world in which each character exists.

Where do you do your work?

I do my designing at my dining room table, which is a hand painted table from Theatre de la Jeune Lune’s production of Maria de Buenos Aires. I feel inspired each time I sit down. The space is very eclectic, remnants of shows and art projects, and thousands of renderings in portfolios.

What advice do you have for actors working on new plays?

You have a music background and are known as a singer as well as an actor. How does this inform your acting?

I am usually last off-book, because I use the movement, sound, and intention of the other actors’ dialogue, stage directions, etc. to help my memory. I remember the “song and dance” of a show. I feel at times like I struggle longer, but when I have it, I have it all at once. It’s a very sudden “aha” moment for me. I ask minute questions right up until the end.

What is your dream role?

A show that incorporates Billie Holiday, Etta James, and me in one show about music and history and jazz and blues and how that has influenced my world as a dancer and singer and now writer. A show about me becoming me, and how my little mark left in this world is connected to whomever comes after me through this music.

What is a creative risk that you took that you’re proud of taking?

The Gospel of Lovingkindness at Pillsbury House Theater in 2015. I had to break down in a scene where my dead (murdered) son’s stolen tennis shoes (Jordans) are returned to my front door. When I see the shoes, I am supposed to finally release this pent-up grief. I asked the director, Marion McClinton, to let me have the moment happen without rehearsing it. That the moment would happen during the performance, and I could wail and scream and grieve as long as needed each night. The only way I could fully let go was to feel it in the moment every night.

What’s something about you that may surprise people?

I have times where I withdraw from the arts community and kind of shut myself away to recharge or rest. “Let the light build and cool down.” After hard shows, or shows that are emotionally taxing, I disappear for a few weeks to shed the character.

Credits include: Dirt Sticks and The Changelings (Ten Thousand Things Theater); To the Moon, The Clumsy Man, and My Life as a Fairytale (Open Eye Figure Theatre)

You have a dance background and are known for physical performances. How do you approach each new character’s physicality?

I do begin with movement to uncover a new character. It is an intuitive process. I experiment with the rhythm and feel of my feet on the ground, the carriage and mobility of the spine, the sense of weight or buoyancy in the body, patterns of compensation and placement of tension—I learn through moving and by feel. Mostly, I let myself go on tangents and see what works.

What is your dream role (either one that exists or one that hasn’t been written yet)?

Ariel in The Tempest or Prospero. I love theatrical tricks of illusion, from the ridiculous to the sublime. I’d like to conjure a storm.

You’re a Ten Thousand Things Core Artist. What is it like performing in social justice spaces such as shelters and correctional facilities?

Great. Beautiful. Rare. Anything can happen. With a conventional audience you kind of know what will happen: the audience will sit quietly, laugh at the funny parts, and clap at the end. But a TTT audience is not practiced, predictable, used to this kind of thing. They are ready to be surprised and they almost always talk back. It’s a less formal situation, outside of the enforced focus and quiet of a theater, so the play becomes a true conversation between the performers and the audience—gathered strangers. We learn about the play from each other; and, like a conversation, the point is not to control it but to remain sensitive to it as it evolves. 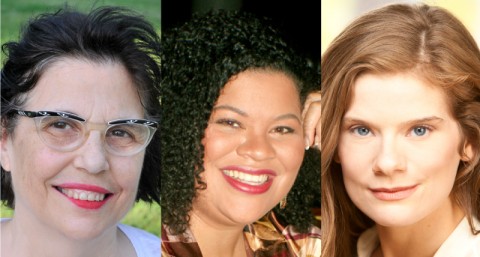