PlayLabs is one of the nation’s most intensive play development programs, giving playwrights 30 hours of vital workshop time with a team of collaborators and two public readings with time for rewrites in between. Over 75% of the plays featured in PlayLabs over the past decade have gone on to production.

The 2014 PlayLabs festival lineup is as follows:

Taylor and her girlfriend, Izzie, have always been staunchly opposed to gun ownership, especially as they see the effects of gun violence on their city. When Taylor’s brother, Frank, comes crashing into their lives unannounced, he disrupts their well-ordered home and exposes their unspoken anxieties and betrayals. An existing conflict escalates to dangerous heights, and the three find themselves testing the definition of self-defense.

“The Absence of Weather” by Ken Urban
A Cold War tragedy launches a new era of American paranoia.
Tuesday, October 21 at 7 p.m.
Saturday, October 25 at 1 p.m.

United States Secretary of Defense James Forrestal enjoyed a meteoric rise to power during World War II. By 1949, he has been forced out of office and committed to Bethesda Naval Hospital, convinced that Soviets are infiltrating the U.S. government. As the hospital staff struggle both to treat and protect their patient, Forrestal worries that he has betrayed those he loves in pursuit of ghosts. An American tragedy about the wages of fear.

Marriage equality finally reaches New York, and commitment-shy David finds himself unsure how to react. Nervous in the face of “wedding fever,” he retreats to his home full of unopened books and his grieving activist roommate. When his best friend’s bachelor party takes him to Montreal, he is unexpectedly swept off his feet by a beautiful young florist. In the months that follow, David and his non-traditional family have to decide for themselves what it really means to be committed, what it means to be married, and what it means to be queer.

All PlayLabs events are free and open to the public. Reserve tickets online or contact the Playwrights’ Center at (612) 332-7481 or info@pwcenter.org. 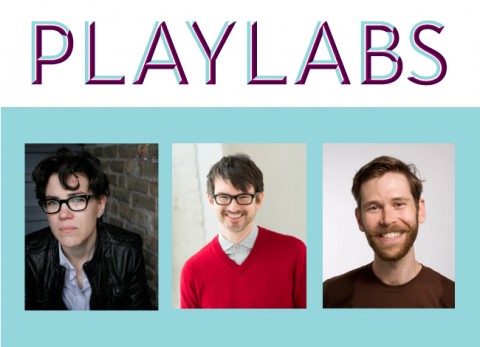