Sharif's works include Habibi; The Santa Barbarians; Bodies in the Park

Why do you write plays?
To explore my heritage and to heal fractures I see in the world.

Harrison's works include When Last We Flew; AND SHE WOULD STAND LIKE THIS; Look Upon Our Lowliness

What are you working on?
Plays with jump-roping teens
A tennis icon
And a seriodiscordant couple.
And musicals about a sharecropper with a secret
A man dodging the draft
And a woman falling in love with a jazz man in Paris.

How do you like to work with artistic collaborators?
I've written a lot of plays where the director and I cast the actors before the script was written. Getting to assemble the team is like the first act of a heist movie—you have to have a good sales pitch if you're going to get true artisans to sign on before the plan is finished. It also helps me to know that I will fail these specific people if I can't come up with a decent script. Expectation and disappointment are big motivators for me, and if I have to engineer those myself, I will.

Kate's works include Thunderbodies; An Almanac for Farmers and Lovers in Mexico; Concertina

Why do you write plays?
I write out of conflicting impulses of idealism and anti-idealism. My idealism comes with the hope that we can do better, as a society—and that something as small as a play might be good enough kindling to start a fire. But my anti-idealism says: Don't forget reality, as you daydream. People aren't made to be saints, they're mammals. So: I write to bring us down to earth, to our bodies and smells and mistakes. I want to point out all that is ridiculous, embarrassing, and beautiful about holding big dreams and base needs in one body.

Josh's works include Leftovers; The Stone Will Roll; Gravity

Who or what inspires you?
What inspires me is this new renaissance of Black theater artists who are creating their own work and spaces for our stories to be told. To be in the trenches of this ancient creative force has been nothing but a dream. There's so much love and intention into what we do that it can't just be one of us who makes it. It has to be all of us. Especially my generation! We dream fiercely, we dream out loud, and most importantly, we do the work. That sets me on fire.

Deborah's works include The Man in the Sukkah; The Aleph Complex; Portmanteaux

What playwriting/theater advice to you have for others?
There's a moment in The Last Crusade when Indiana Jones is at the edge of a cliff. He takes a step into air and a path appears that he hadn't seen from the angle he was standing. I think that a career in the theater is a lot like that. Constantly. Every line you write, every time you send out a play, every day, is a leap of faith. But if you keep stepping forward, a path will appear.

Why do you write plays?
To entertain, to move (people, facts, minds, deeply held beliefs, souls), to be in conversation with the world around me, to push performers into territories that expand our idea of what it means to be human, to push directors and designers into re-inventing the art form with every show, to push myself, to create a lasting piece of beauty and compassion that might continue to live after I've stopped, to get to hang out with people who challenge and inspire me daily, to argue, to feel the high of making something, to make a living.

What are you working on?
I've been working on two new plays. One is In 1987: We Were Kids, a drama linking the story of Budd Dwyer and Baby Jessica's rescuers. It's a play about believing in a system, masculinity, and justice. I've also been working on We're Gonna Be Okay, a dark comedy about national fear, set during the Cuban Missile Crisis.

What are you looking forward to this year, artistically?
I am so frigging excited to be back at the Playwrights' Center with a McKnight. I want to make a T-shirt that says, "Emerged, Bitches." I think a lot of people could use that T-shirt. But I'm also scared to write the play I've been commissioned to write. This is a big one I've been postponing since 2006 (when, just for context, I did write a play about Gaza; I don't procrastinate lightly). I am looking forward to having written that play, which is called Blood and is about doctors and AIDS in the early 1990s. I think Taylor Mac is going to perform in it, which I'd say is a mightly carrot but to say carrot and Taylor Mac in one sentence just sounds dirty. 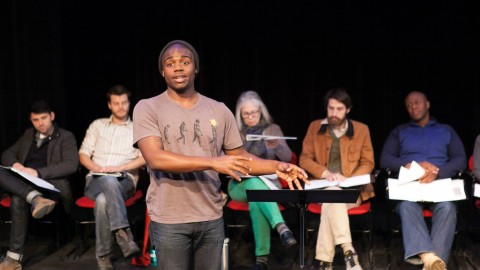