What are you working on?

Plays: Jeffrey Hatcher's Hamlet, and adaptations of Sherlock Holmes and the Ice Palace Murders, A Connecticut Yankee in King Arthur's Court, and A Confederacy of Dunces.

Film: The Emperor starring Adrien Brody, and A Slight Trick of the Mind starring Ian McKellen.

I usually respond to this question with some glib reply: "I have the knack" or some such thing. The real answer must be more compelling. Stages are hard-won, and the attention of an audience must be earned before it is paid. I write plays so I may be allowed to claim time, space and rapt consideration.

Act. Paint sets. Work in the box office. Bug the marketing department's meetings. Bug the Women's Restroom at the intermission of your plays (this advice from Sherry Kramer). Don't bother to bug the Men's Room. Men don't talk about plays in restrooms. Pretend you're the A.D. of the Guthrie and pick a season. How long would you survive in the job choosing the plays you say you'd choose. Read Act One see Moon Over Broadway. Imagine yourself in a different profession.

Other playwrights, old and new. Actors I'd like to write for. the sea. The lakes up north. Time and a view of water.

The Guthrie season. It's Joe Dowling's final season as artistic director, and the choices and their execution always tell you something about the artist - as director, as impressario, as businessman, and as a man.

In the theater, something that makes me want to stay in my seat long after the curtain has come down. 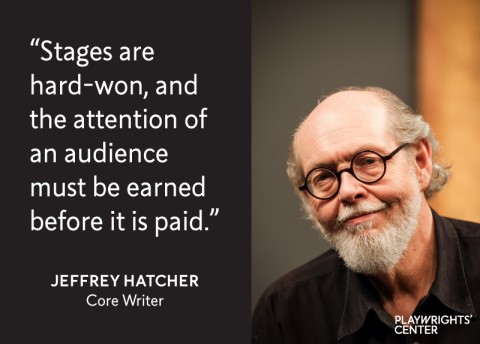