Tell us about Cocked.

I walked around with this play in my guts for over three years. I didn’t know what it was going to sound like. I didn’t know who the characters were. It felt like a tidal sweep, this play. And finally, I couldn’t do anything but put something down. I suppose I always hope, when working on a play, that the audience will feel what the characters on stage are feeling. That with the right tidal pull we will all get dragged into the same primal ocean. It’s very necessary, in this play, that no one character is felt to be “right” or “wrong” but struggling. Like we all are. To figure out how to feel safe in our lives. Emotionally, psychologically, and of course physically.

A brand new play. There’s tennis in it. I’m a horrible tennis player.

Basically because writing plays are a way I can work out questions I have about what’s going on in the world. What’s happening to our society, our culture. And because I want audiences to have an experience of practicing empathy.

There’s a lot of groaning. And coffee. And rewriting. Tons and tons of rewriting. A lot of pencils. Runs. And spotify playlists on repeat. There’s doubt. And anger. And tons of worry. And reading lines to my dog Gilbert who is always politely interested by mostly nonplussed by my dialogue. But mostly I just try to show up and get the pages down as often as I can.

Coming back to the Playwrights’ Center!

Taylor and her girlfriend, Izzie, have always been staunchly opposed to gun ownership, especially as they see the effects of gun violence on their city. When Taylor’s brother, Frank, comes crashing into their lives unannounced, he disrupts their well-ordered home and exposes their unspoken anxieties and betrayals. An existing conflict escalates to dangerous heights, and the three find themselves testing the definition of self-defense.

Sarah Gubbins’ plays include Fair Use, In Loco Parentis, The Drinking Problem, The Kid Thing (Jeff Award and Edgarton Foundation New American Play Award), fml: how Carson McCullers saved my life, I am Bradley Manning, A Sense of Things, and Cocked. Her plays have been produced at the Steppenwolf Theatre, Actor’s Express, Next Theatre, About Face Theatre, and Chicago Dramatists among others. Her plays have been developed at the Public Theater, New York Theatre Workshop, The Goodman Theatre, Steppenwolf Theatre, the Playwrights’ Center, Center Theatre Group, and the O’Neill Theater Center among others. She has been a Carl J. Djerassi Fellow and Jerome Fellow and was named Best Playwright of 2012 by Chicago Magazine. She is a member of the Center Theatre Group 2013-14 Writers’ Workshop and the Playwrights’ Union. M.F.A., Northwestern University. 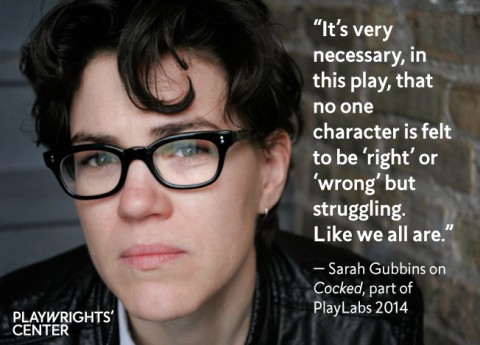