Next month, Steppenwolf Theater will host the world premiere of Mona Mansour’s new play, The Way West. Local friends of the Playwrights’ Center might recognize the play from last year’s Ruth Easton New Play Series, which featured a 5-day workshop along with a public reading. We are beyond excited that Mansour’s beautiful play has found a home on the Chicago stage.

Mansour has been far from idle in the year since her Ruth Easton workshop. She says the play has “gotten tighter” in the last year, and has lost one of the side storylines. The cast has also decreased in size, as two supporting characters have been cut.

The play follows a California mother (played by Steppenwolf Artistic Director Martha Lavey) and her two grown daughters as they struggle with finances and their own relationships in preparation for the mother’s bankruptcy. The mother shares stories and songs about American pioneers making their way West. The featured songs in this production are a collaboration between Mansour and composer/sound designers Rob Milburn and Michael Bodeen. Milburn and Bodeen have spent the last thirty years composing and creating sound design for stage productions, films, and installations across the country. Mansour is delighted to work with them on this piece, saying, “They both have a great sense of humor, and understand the play, and they’re just so good at what they do.”

Audiences have a lot to look forward with this production team. Director Amy Morton is a familiar name to Steppenwolf audiences, having recently led the critically-acclaimed premiere of Clybourne Park. She is also a Tony-nominated actress (honored for her work in 2008’s August: Osage County and last year’s Who’s Afraid of Virginia Woolf?) who brings a great deal of experience to the table. The production is only a few weeks into rehearsal, but Mansour has already found her director, “incredibly insightful.”

“She has already helped me figure out moments where I wasn’t clear about motivation,” Mansour says. 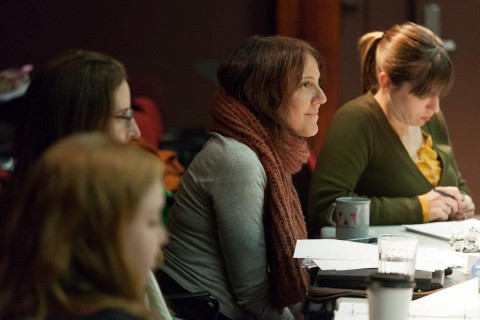