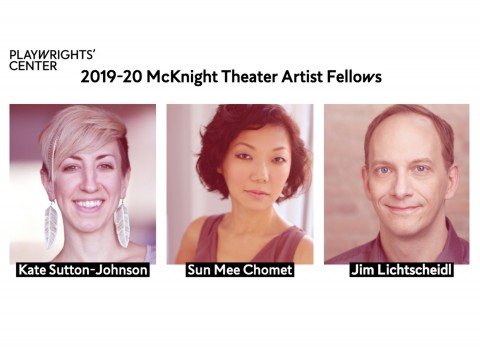 The McKnight Theater Artist Fellowships at the Playwrights’ Center recognize Minnesota theater artists other than playwrights whose work demonstrates exceptional artistic merit. The fellowship provides a $25,000 award as well as access to $7,000 to fund a new collaborative project. Selection is based on a commitment to theater arts, evidence of professional achievement and a sustained level of excellence in the applicant's work.

The 2019-20 McKnight Theater Artist Fellows are:

Sun Mee Chomet, a St. Paul-based actor, dancer and playwright. She just recently finished a run with Ten Thousand Things’ for The Sins of Sor Juana. She has worked with many Minnesota-based theaters, including Ten Thousand Things Theater, Penumbra Theatre, Guthrie Theater, Jungle Theater, Mixed Blood Theater, Pillsbury House Theatre and Park Square Theater. "This fellowship is humbling,” says Chomet. “To have been recognized by a panel of my respected peers in a community that is beloved is simply everything.” This is her second time receiving a McKnight Theater Artist fellowship.

Jim Lichtscheidl, an actor, director, choreographer and writer based in the Twin Cities area. Acting credits include Nice Fish with Mark Rylance at ART, St. Ann’s Warehouse and London’s Harold Pinter Theatre; over 30 productions at the Guthrie Theater and Twelfth Night at the Shakespeare Theater Company in Washington, D.C., which earned him a Helen Hayes Award for Outstanding Supporting Actor. He says the fellowship gives him “the chance to develop projects that have been on my back burner for quite some time, including a movement to inspire empathy using pop-up theater in public spaces.”

Kate Sutton-Johnson, a set designer based in Minneapolis, MN. Her credits include contemporary dramas, classical theater, large-scale musicals, devised work and everything in between. Having designed dozens of shows locally and nationally, her most recent projects include Noises Off at the Guthrie Theater and Sweeney Todd at the Asolo Repertory Theater. “The fellowship at the Center is an incredible honor. For me, small measures of risk have always been a necessary part of continued artistic evolution,” says Sutton-Johnson. “What the fellowship gives me this year is the support to lean out a little further into the unknown than I have before."

The McKnight Theater Artist Fellows are chosen by a panel of local and national theater artists.