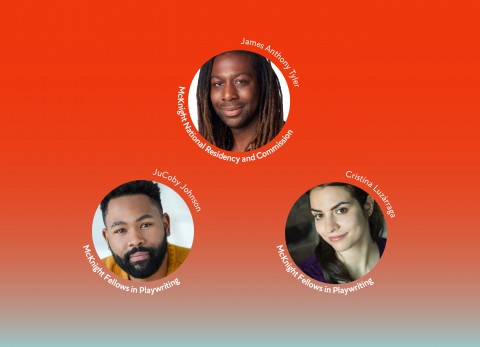 The McKnight Foundation and Playwrights’ Center are furthering their work to realize a more just and creative theater field in the United States by supporting some of today’s most promising playwrights through the McKnight National Residency and Commission and McKnight Fellowships in Playwriting. The awards will holistically support playwrights as they create work for an evolving theatrical industry.

“Our longtime partnership with the McKnight Foundation has been critical as we work together to create a new paradigm for theater-making in this country,” said the Playwrights’ Center producing artistic director Jeremy B. Cohen. “We of course look forward to in-person theatrical gatherings again, but we are adamant that the theater industry does not return to the pre-pandemic status quo riddled with systemic inequities. To have the support of the McKnight Foundation, who is equally committed to creating a world where everyone can thrive, is truly encouraging.”

He continued, “It’s incredibly rewarding for us to play a role in the artistic growth of these amazing playwrights. Being able to further uplift the careers of Cristina and JuCoby, two exceptional, Minnesota-based playwrights, is thrilling. And to welcome back James—to deepen our role as one of his artistic homes—is a unique pleasure. I’m excited to see what the upcoming year has in store for these writers.”

“This commission and residency mean the world to me,” stated playwright James Anthony Tyler. “The Playwrights’ Center is one of my favorite artistic homes. I know that I'll get top-notch support. It feels like whenever I have had periods of doubting my artistic sensibility, the Playwrights’ Center has come along to affirm my voice.”

McKnight Fellow Cristina Luzárraga commented, “A career in theater is more precarious than ever, and I’m humbled by this opportunity to double down in my commitment to playwriting. Like most people, I’m starved for social interaction, and I can’t wait till we can collaborate again in shared space. We’re all trying to imagine a better future for theater, and I’m grateful to the Playwrights’ Center for facilitating those difficult conversations.”

“I have been gifted with the opportunity to continue my work with the support of all the wonderful people at the Playwright's Center,” shared McKnight Fellow JuCoby Johnson. “It means I have the chance to travel (Covid willing) and explore the ways in which different communities around the country are creating art and making change in this moment.”

Each year, the Playwrights’ Center serves as an artistic home for over 40 playwriting fellows and Core Writers, in addition to supporting 2,300+ member playwrights across the globe. The Center also partners with producing theaters to move work from page to stage through its Regulars program. The fellowship programs have anchored the Center’s support of playwrights and theatermakers for nearly 50 years. The McKnight National Residency and Commission funds a play commission to create and develop new work. The McKnight Fellowship in Playwriting awards two Minnesota-based playwrights funding for play development and other professional expenses. 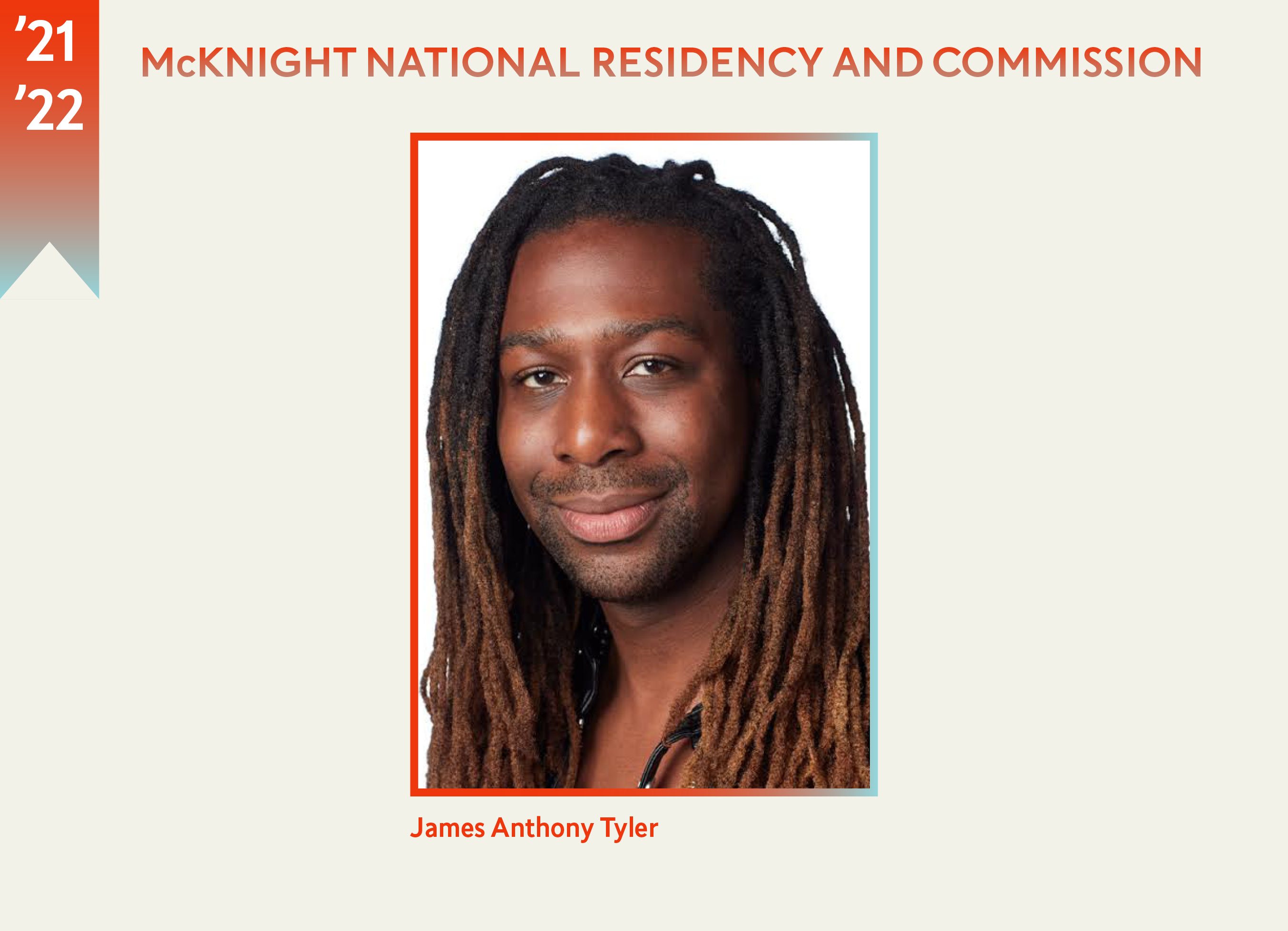 The McKnight National Residency and Commission funds the creation and development of new works and comes with a $15,000 commission and up to $12,250 in workshop funds to support the development of the play and a public reading.

James Anthony Tyler is the recipient of the 3rd Annual Horton Foote Playwriting Award, an inaugural playwright to receive a commission from Audible, and a 2016 Theatre Masters Visionary Playwrights Award recipient. His plays include “Some Old Black Man” (Berkshire Playwrights Lab at St. James Place and 59E59 Theaters and a University Musical Society filmed production), “All We Need Is Us” (Keen Company, currently streaming on all podcast platforms), “hop thA A” (currently streaming on Audible), “Artney Jackson” (World Premiere at Williamstown Theatre Festival, 2018 Edgerton Foundation New Play Award), and “Dolphins and Sharks” (LAByrinth Theater Company and Finborough Theatre in London). He’s a 2021-2018 MacDowell Fellow, a 2021 Hermitage Artist Resident, and 2018 Djerassi Fellow, 2018-2019 Amoralists Wright Club Playwright, 2017-2018 Nashville Rep Ingram New Works Playwright, 2016-2017 Ars Nova Play Group Resident, 2016 Working Farm Playwrights Group Resident at SPACE on Ryder Farm, 2015-2016 Playwrights’ Center Many Voices Fellow, 2014-2015 Dramatists Guild Fellow, and he was a member of Harlem’s Emerging Black Playwrights Group. He has an MFA in Film from Howard University and an MFA in Dramatic Writing from New York University. He is also a graduate of The Juilliard School’s Lila Acheson Wallace American Playwrights Program, and he was the Staff Writer for the OWN Network show Cherish the Day, created by Ava DuVernay.

Tyler exclaimed, “I am excited about this commission for the time, space, and dynamic support that will be afforded to me by the Playwrights Center, and I'm also excited that I get to be just one part of this exciting community of fearless Playwrights during the 2021–2022 season. My hope is to both spend time working on my own play, spend time watching the work of other playwrights in the community, and hopefully get to know as many of these bold artists as possible.” 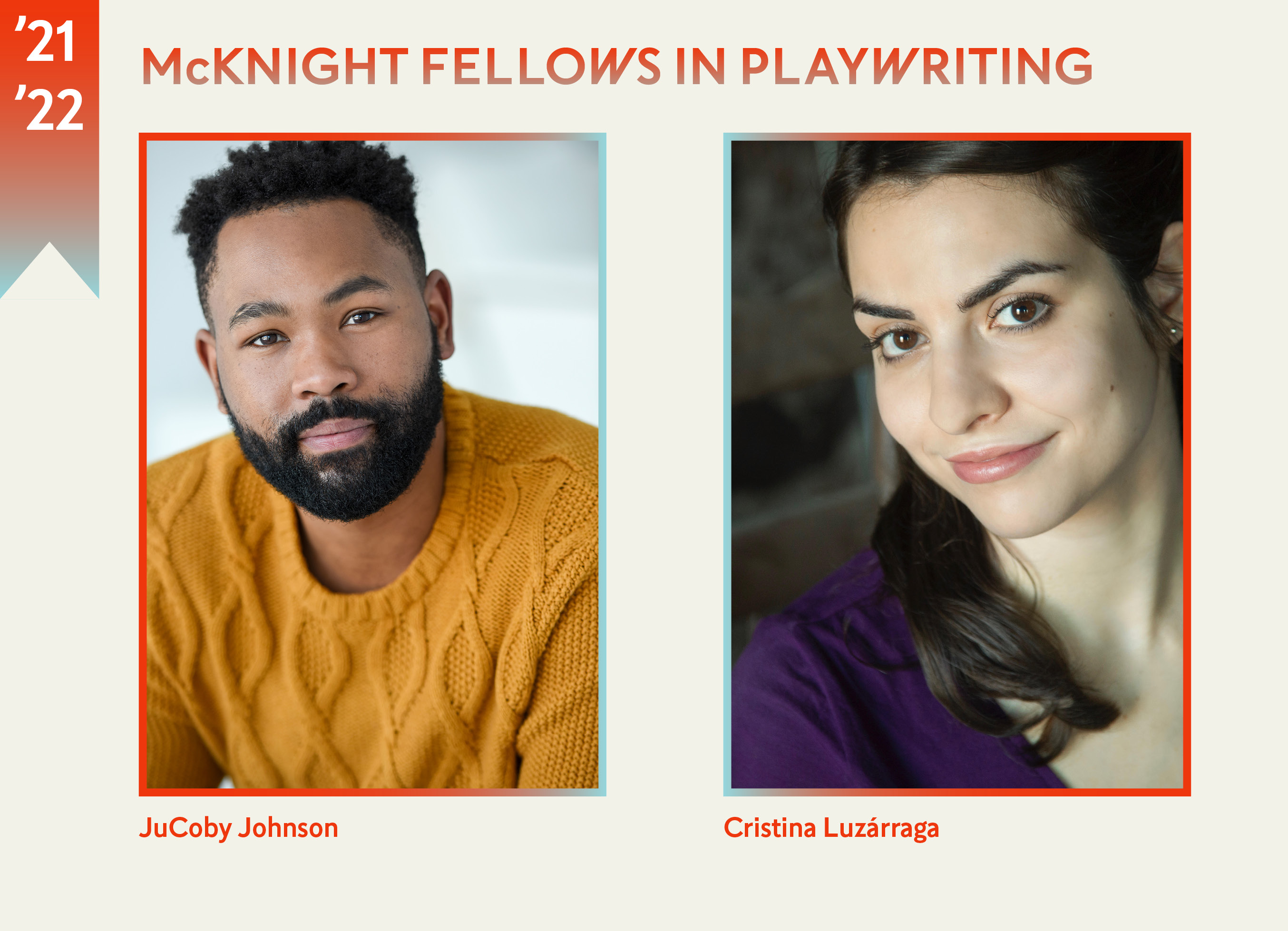 The McKnight Fellowship in Playwriting awards two Minnesota-based playwrights a $25,000 stipend, $2,500 to support play development and other professional expenses and $1,400 in travel funds.

JuCoby Johnson grew up in Jacksonville, FL, moved to the Twin Cities in 2011 and has been creating there ever since. He has been seen onstage at The Guthrie Theater, Cincinnati Playhouse in the Park, The Jungle Theater, Theater Latté Da, Theater Mu, Ten Thousand Things Theatre Company, and many more. His plays include “How It's Gon Be” (Underdog Theater, 2019), “...but you could've held my hand” (2020 O'Neill NPC Finalist), “5” (2021 NPC Finalist), “I'll Be Seeing You Again” (Jungle Serial Audio Series, 2021) and “Revelations” (Playing On Air, 2021). He is a 2021-2022 McKnight Fellow in Playwriting and a graduate of the University of MN/Guthrie Theater Actor Training Program.

I'll be furthering the work on a play (“5”) with Trademark Theater, a play with music (“On God”) with Theater Latte Da, and I'll be trying my hand at a three-act American drama (“On Brutality; or I'm Undone Because”), said Johnson.

Cristina Luzárraga is a playwright and educator from New Jersey whose dark comedies tend to feature unruly women and an exploration of the grotesque and uncanny. Her plays include “Critical Distance,” “Millennialville,” “Havana Syndrome,” and “La Mujer Barbuda” (2019 Screencraft Stage Play Winner, produced at Blank Theatre in LA). An alum of The Second City Conservatory in Chicago and Ensemble Studio Theatre’s Youngblood collective, she was a 2019-2020 Jerome Fellow at the Playwrights’ Center in Minneapolis where she currently resides. Her full-lengths have been developed with Playmakers Repertory Company, Teatro LATEA, and IATI Theater; her short plays have been featured in the 2020 Samuel French Off-Off Broadway Festival and published in anthologies by Smith and Kraus. A member of Clubbed Thumb’s Early Career Writers’ Group, she is currently working on a commissioned musical about Betty Crocker for History Theatre. BA: Princeton; MFA: Ohio University; MA in Educational Theatre: NYU.

Luzárraga explained, “This fellowship means time; time to let my mind wander and explore those weirder ideas that are harder to tap into when you can only afford to write on nights and weekends. It also represents a vote of confidence after a year in which confidence has been in short supply.”