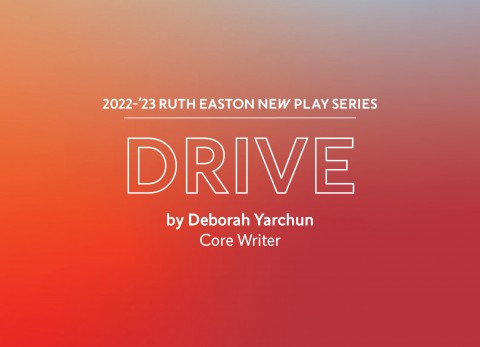 Hayley: My first question about this play is: I know this is not your background. You are not a truck driver. You’ve not spent much time driving trucks as far as I know. What inspired you to write this play and how did you come up with the idea?

Deborah: I’ve long been fascinated and terrified by what the social impact of the next level of automation will be. I wanted to tell a story about that, and truck drivers made so much sense. They’re first on the line to potentially lose their jobs as we move towards self-driving vehicles.

I’ve also long been fascinated by truck drivers. I was that kid on road trips who would be staring out the window at the passing trucks wondering about their lives. They’re also the ideal community to center this around: being a trucker is a lifestyle, it's so much a part of their identities. They’re literally living on the road. Living on a box on wheels in a space the size of a bathroom, as one truck driver put it. To have that suddenly go away—what does that mean for somebody?

Hayley: You’ve done a fair amount of research on this project including interviewing truck drivers. Can you talk about your research process, and how you took that raw material and crafted fictional characters?

Deborah: I started my research at a truck stop in Texas. I drove to the nearest big truck stop I could find and started chatting with truck drivers. No one asks them about their lives and a lot of them had a lot of stories. They also directed me to all these amazing Facebook groups for truck drivers. I had a ton of conversations and characters emerged from these people I was talking to. No character is based on a specific truck driver I talked to, but a mix of voices and the needs they expressed, and things that they emotionally felt worked their way into the characters.

Hayley: What was the sentiment from the truck drivers around automation? Was that a question that you brought up in these interviews?

Deborah: I saved it for last. Because it's definitely a conversation killer. Interestingly a lot of them saw that as complete science fiction. I think that conversation has shifted over the past two years as testing of self-driving trucks became more prevalent. But not seeing it coming worked its way into the story too. The characters suddenly have the rug pulled from beneath them in a way that they didn't anticipate was possible. What will that mean?

Hayley: What were some of the central things that you learned that you wouldn’t have gotten from just research in books, or going with your own imagination?

Deborah: The nitty-gritty details. A lot of them talked about the beauty of the sunsets, the specific locations where they feel so fortunate that their front windshield is their office, and the beauty of the road. But a lot of them also talked about deep loneliness and what it means to feel like nobody cares when you’re on the road, that you’re just in the way when you’re actually delivering everything that touches their lives.

And the experience of being a woman on the road. Some of them felt very empowered by it. Some had really interesting strategies for surviving it at times. There was an image of antelopes stuck on fences in Wyoming. Almost every single trucker I talked to had a horror story about a car crash they’d witnessed and the trauma of that. I was picking up the details that really color their lives and trying to work them into the play in a way that feels visceral and alive.

Hayley: In what ways do you think this piece is similar to your other work?

Deborah: I’m drawn to people whose stories aren’t often told, or aren’t told honestly. I often also write about the Midwest; I want to tell stories about people who are often seen as in flyover country. That’s very much in this play, it being set in Iowa. There are also very strong, complicated women in this play. That's true of a lot of my plays. I want to reflect the complexities that I see in my world as a woman and in my life.

Hayley: Can you talk about your influences and how you have developed your aesthetic voice?

Deborah: I started learning about playwriting really young. I read, like, a play a day in high school. I can’t say there is one specific influence, it's more a combination of all the theatrical forces I’ve had an opportunity to witness or read. Maybe a lot of bar plays influence this play, just because it lives in the spirit of that American bar play. But it's also a road trip play.

Hayley: What are you hoping to get out of this particular workshop process? I know you have developed this piece in some other theaters and organizations—where do you feel like the play is right now?

Deborah: I think the play is in a strong place, so figuring out ways to deepen the relationships without hurting the rhythm or the pacing. Figuring out how it can feel as propulsive as possible. The stakes are very much tied to, in the play, an off-stage character. How do I handle that in a way that’s visceral and clear so we understand how he has affected these people's lives?

The opportunity to hear it with sound is going to be such a gift. There are so many moments where sound plays a key role. You hear the voices of truckers on CB radios—I’ve only had processes so far where that’s been played by the actors, and that changes the feel. There’s a lot that I’ll learn from that element.

A lot of the work I did on the play during the pandemic was virtual. I did have an opportunity to hear it in person, but it wasn't a long rehearsal process. Just being in a room with actors will be helpful for teasing out the rhythm and pacing because Zoom is not always the easiest place for that.

Hayley: You’ll also be hearing the play in front of two live audiences. Anything you will be listening for?

Deborah: I’m going to be listening to when people laugh. Making sure the humor resonates. The moments of lift are so important because the play is a devastating story. So, to make sure that it’s resonating on the right frequency with the audience. Also listening to the moments when people respond. You can't hear that on Zoom.

Hayley: You have an upcoming production of this at Mirrorbox Theatre. How did that come to be and what are you looking forward to in that production?

Deborah: Cavan Hallman [Mirrorbox’s Artistic Director] reached out to do a reading during the pandemic. He was doing this amazing reading series with a lot of writers whose work I love and I was like “oh wow, I get to be a part of that?” What an honor to have him ask to do a production of the play to open their new theater space. It’ll be in an autobody shop converted into a theater which feels right for this play.

It’s an hour from where the play is set, so I am excited to be in the community again. It was really helpful during the reading to hear the people who lived around the place responding to the play. I imagine I will pick up on some details that will work their way into the play.

Hayley: Are you working on any other pieces?

Deborah: I recently discovered how my grandmother survived World War II. I am interested in writing a play that explores my own experience of trying to piece together the history and then discovering family members I didn’t know I had.

Hayley: Wow, that sounds fascinating! When is that piece happening?

Deborah: I have to write it! It came about because I discovered a photo of my grandmother on the US Holocaust Memorial Museum’s website. The caption said that she survived by escaping into Soviet Russia. Many Eastern European Jews survived by escaping into Russia. They escaped one dictatorship to another and that had its own cost and consequences.

Hayley: I look forward to reading that play. You’ve been part of the Playwrights’ Center community for a long time, as a Jerome Fellow and now as a Core Writer. What has that relationship meant to you?

Deborah: Playwright’s Center has been so important in my life as a writer. I did two consecutive Jerome fellowships at a pivotal time. It's been fellowships that have enabled my career in so many ways.

What's exciting now is the ability to deepen plays through these workshops. The deadline is critical, especially at this time in my life. Knowing that one time a year I can come work on a play—perhaps the one I just mentioned will be next year's workshop—and I will have a deadline to write it because of Playwright’s Center.