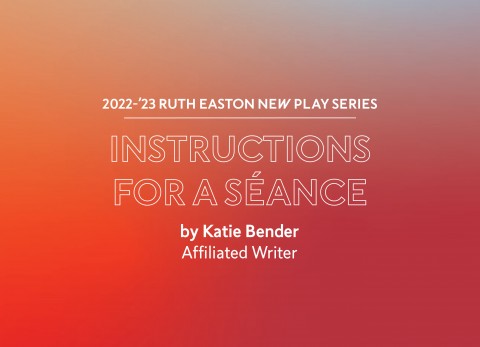 Hayley: I want to start by talking about magic. What’s your relationship to it and your interest in it?

Katie: I have always been really interested in magic and theater, what magic can do onstage and what it does to an audience. I’m excited about the possibility that in seeing a magic act—a thing that you think impossible realized—our minds as audience members can crack open a little bit and imagine other things that seem impossible becoming possible.

Hayley: How did you become interested in Houdini, who is featured in this piece?

Katie: When I was a graduate student at the University of Texas, Natalie Novacek, a Minneapolis-based director, asked me if I had seen the Houdini archives at the Harry Ransom Center at UT. Together we started looking through the material. I was compelled by a bunch of things: the notion of an act of escape was tantalizing to me because I was a graduate student and I was a parent. It felt like all of my peers were, you know, taking trips to Mexico to do peyote and write their great American novel while I was, like, “Well, I’ll wake up at five so I can write for an hour [laughs].”

Hayley: How did you decide to merge your personal narrative with Houdini’s narrative?

Katie: I’m so glad you asked me this. This play was originally a two-hander about Houdini and his assistant, Theo, that you and I worked on together. One of your earliest notes to me was, “I’m wondering where Katie Bender is in this?” You raised this question that stayed with me: How is this personal to me?

Then I started another workshop by reading the whole thing out loud to the team. The rhythm of Houdini’s speech was quite specific, and that was the only way I could explain it. In doing it myself it became something much more interesting: me playing Houdini.

I’m not a great actor [laughs] so it always felt like me putting on Houdini. And that felt fun and sort of irreverent. So I spent a year taking the two-hander and turning it into a solo show.

Hayley: Now that you’re in it, is INSTRUCTIONS FOR A SÉANCE about the relationship between you and the audience as well as you and Houdini? What are you hoping to explore through that audience–performer dynamic?

Katie: I want to attempt an act of mentalism, that hopefully will have the audience imagining their own escape—what that would mean and how that could be possible for them.

Hayley: Could you talk a little bit about working with a magician? We’ve had many different types of dramaturgs at the Center, and once had a fortune teller as a dramaturg, but we’ve never, as far as I know, had a magician, so I’m excited that you have Brett Schneider working with you.

Katie: Brett is a really incredible, dramaturgical magician. He’s thinking about how the magic serves the story and moves the audience. He was able to help me articulate what I love about magic: it is that moment of the possibility of wonder. Rather than thinking about tricking or fooling an audience, it’s about how to open up an audience in new ways.

Hayley: Is this your most personal play to date? How do you handle incorporating personal material into public work?

Katie: This is definitely the most personal piece I’ve worked on, partly because I’m the only performer. I’ve done devised work but because I was sharing the stage and sharing the writing, the burden of being personal wasn’t solely on me. Whereas this is very much of and from my life. I feel a little uncomfortable with it to be honest [laughs].

I hadn’t been a performer since I became a mother so there’s this exciting challenge of getting back onstage, which I really love. Motherhood is so intense and the pressure of trying to be an artist and a mother in late-stage capitalism is so intense that I don’t know what else to do but make this play. It has felt like an opportunity to use what is uncomfortable for inspiration and also a way of continuing to put myself out in the world as both artist and mother. That feels important.

Hayley: As the sole author and performer of this piece, how do you navigate rewrites?

Katie: Oh gosh, I’m such a work horse when it comes to revisions. I’ve done a couple workshops on this, but I have never fully been just a performer—I tend to say “oh I can fix that!”

I want to try to just be an actor without my playwright brain trying to revise things. I really trust Hannah, the director, so I think that I will be able to do that, but it does take a lot of trust to let go of the playwright brain and let there be theatrical moments that maybe don’t require your fix.

Hayley: You mentioned this notion of escape being central to the play. We have all, at times, craved escape in the past few years. Has that influenced your thinking?

Katie: What escape means to me has changed, especially in the pandemic and in the world we live in now. When I started writing this play, escape was this fantasy of almost annihilation—I could just leave everything, all responsibility, all relationships, and that was really enticing.

I actually became a playwright when I became a mother. This notion of escape is funny because all of my creative life is based on my being a part of my family. During the pandemic I was really struck by the notion of colonizing Mars or “let’s escape the planet,” and the sort of people who could afford to escape to country houses or secluded islands. I started to think of escape as colonialism: you can’t deal with the mess in front of you so you’re imagining that you could go someplace else and everything would be perfect. That's actually what colonialism insists on: your version of reality but in a whole new place.

I live in Texas, a pretty rough place to live in terms of politics, and I have started to feel that in some ways we don't get to escape—this messy democracy, the realities of the pandemic.

On the other hand, I do believe there is a kind of escape that happens in the theater that is incredibly important right now. A space that allows us to communally world build and imagine other ways of being in the world, other possibilities.

Hayley: Are there questions that you're holding as you enter this workshop? That you’re asking of the play or of the audience?

Katie: The question I want to bring to the audience is: does this experience, this séance open up ways of imagining new possibilities? That's the question in the foreground of the workshop.

I’m also grappling with arranging child care and trying to have this play done out in the world—what does that mean now? How do my family and this play coexist out in the world [laughs]? That's the question that I’m posing to myself.

Hayley: Because ultimately the character of yourself in this piece is still a character—a version of yourself but maybe not yourself completely.

Katie: Yes! When I did the earlier workshop a couple people said, after the workshop, “you're so nice to your husband in the play” as though they wanted an edgier version of Katie Bender. I brought this up to my husband, who said, “you are just playing a character and it could be a character of you in whatever circumstances you want.”

The question of what happens at the end is really exciting to me: does this character of Katie Bender return to her family or does she disappear to a dance club in Madrid? It’s been kind of open-ended, depending on where I’m at or what I’m doing. I don’t know where it’s going to go this time but it’s a version that doesn’t necessarily have to be the truth for all eternity [laughs].

Hayley: Maybe the ending’s different each time depending on how you're feeling and the dynamic with the audience?

Katie: How much Frances has slept the night before; how much childcare I got this week [laughs].