The Playwrights' Center's 2014-15 Ruth Easton New Play Series kicks off December 8 and 9 with Forget Me Not When Far Away, a new play by Core Writer Kira Obolensky. Associate Artistic Director Hayley Finn talked to Kira about her inspirations, why she values humor, and how these public readings will help her shape the play.

What inspired you to write the play?

I have been working now for a number of years with Ten Thousand Things Theater. Ten Thousand Things brings theater to people who often haven’t seen it before, to the places where they are—these non-traditional venues can include prisons, shelters, chemical dependency centers, and community centers. I’m always trying to find stories that are going to work for their vast range of audiences. I’d been thinking a lot about stories of exile, about people who come to new worlds, incarcerated men and women who leave prison and return and find everything changed. I’m really intrigued with that idea and with fairy tales like Rip Van Winkle—stories that involve returning to changed worlds after being banished for some time.

In my back pocket from many, many years ago when I interned at Classic Stage Company in New York City was a play from Odon von Horvath that’s called Don Juan Comes Back from the War. I’ve always been intrigued by it because of its structural seamlessness. It’s built around a character who keeps encountering archetypal characters in different guises. It’s written almost without scenes, in a swirl of events. So I was very interested in that structurally. I read it again and showed it to Michelle Hensley, who’s the artistic director of the theater, and I was little embarrassed to show it to her, because it’s actually, at its core, a very hateful play. It’s a play that’s about death and misogyny and there’s little to no hope in it. But there was some seed in there, some idea that was really interesting to me.

You were inspired by von Horvath’s play, but how did you make it your own? Because your play is very different.

It is very different. My work is often set in another time and another place with a sort of blurred background. I was really interested in gender, actually—this idea that in war men can really be decimated from a town or village. And so I started thinking, “Well gosh, that would be interesting if what this soldier comes home to is a world of only women.” I’m interested in how this male character comes back to this place, with his memories and with the memories the women hold as well—and how circumstance can force us to reinvent ourselves and how we act.

The soldier in my play is John Ploughman—he’s been in a very long war. Our country has also been in a very long war, so that felt relevant and appropriate to me. He comes back and learns almost immediately from a town crier that his name is on the list of the dead. What this causes for him is a series of problems that he has to overcome to prove that he is in fact alive, all the while he is trying to reclaim a lost love, who has heard that he has died and is going through her own process of grieving.

You talked a little bit about your interest in exploring gender in the story. Your play has a completely female cast, other than John Ploughman. Was that something you intended as you set out to write the play?

Oh, absolutely! As a female writer I always want to write as many interesting roles for women as I can. I think many female playwrights have that desire. I was very interested in the idea of John encountering a variety of women in different places and circumstances that force him to sort of relearn the rules as they are also being remade. I was also really interested in the romantic trope of redemptive love, which is really different from the Horvath. John has been away for many years, he scorned many women in his time and fathered many children. And he had, just before he left, a short affair with a very innocent young woman, and he comes to believe that she’s the one who’s going to save him. One of the characters says, “You just think you can fold her up all nice and neat, put her in a drawer, come back ten years later and think everything’s gonna be the same.” That’s another question I’m asking. How does love stay alive? What is love, anyway? And along the way, I think there are lots of surprises in the play.

There are. And it’s really funny! I love your sense of humor; it’s very off-kilter and surprising. How did you think about humor while you were writing the play?

For me, humor is an essential part of the theatrical experience. I love to go to the theater and laugh. I think laughing allows us to talk about issues, I think it allows us to feel really sad, and I think it’s a really important part of dramatic experiences. In this particular situation it was hard not to be funny. Everything from a bureaucratic snafu to encountering a government worker who’s inflexible, can be funny; there’s no better way to get at all this absurdity in life than humor. I think that the humor in the play comes from this ridiculous situation, a situation that’s really metaphoric for John. If you’re dead, if your name is on the list of the dead, what do you have to do as a man, now, in this society, to prove that you’re alive?

Where do you locate humor in bureaucracy?

It’s this kind of tyranny—I think that’s why people will laugh at it. I mean, I get it every time I pick up the phone trying to talk to somebody. I get caught in this sort of “the rules are this,” but my situation doesn’t quite fit the rules, and I think that is funny but also infuriating. In my imagination I really find it interesting that these women are really by the book. Society has gone to hell, but the women are gonna stick to the rules, even if it’s gonna bug the shit out of you. There’s something funny about that to me.

What are some questions you’re asking with this play?

You know what’s so interesting is that every time I think I know what questions I’m asking with a play, I present it to audiences and I’m really surprised and informed in different ways. And that’s something that I almost can’t predict. But for me, I think I’m really asking: How do we enter worlds that are unfamiliar to us, but that we think we know? What happens when the rules change? What’s the healthiest way men and women can get along together? Is love really a redemptive force? What makes a man be alive in the world? Those are some of the questions. But, again, I could be totally wrong and the audiences will tell me really clearly in their reactions to it.

At your upcoming workshop at the Playwrights’ Center, you will be able to present it in front of two different audiences. What are you looking for from these readings?

These readings are so useful to me. It’s a chance to look at the structure and see how it works on its feet. Are the points of John’s journey clear? How does it land? Those are all big questions for me. Also, we’ve commissioned Annie Enneking—who’s an incredibly talented theater artist in town—to do two ballads that will be the smoky chanteuse’s songs. We’ll be working on the music, also, how those songs land.

You’ve written this play for Ten Thousand Things and with that audience in mind, but it also feels like a piece that could be done in so many different kinds of ways. Have you thought about other audiences for the play?

I have a sense that it’s a play that actually has something to say to a lot of people. I think it has something to say about war and about change and our changed world and all the people who are coming into our country who don’t understand the rules. And I think that for women it asks interesting questions about what does life look like without men, and is it possible, and how we miss them and need them.

Can you tell me a little bit about your next project?

The play is being created collaboratively with some other Ten Thousand Things artists. It’s about exile and it’s about two lands that are separated: one’s wild and one’s tamed. And people who long for one another across that divide and how they find each other again. It started with the idea of changelings, people switched at birth and fairies that kidnap and shapeshifters. It’s got some magic. Some interesting images in it are a lace-making factory where the women turn into spiders, a man who turns into a fish, and stories that can only be read underwater that melt when they come up.

Reserve your free tickets to Forget Me Not When Far Away » 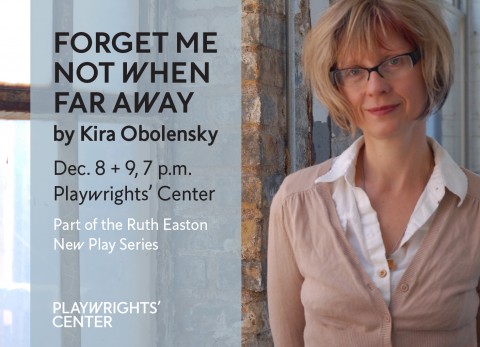