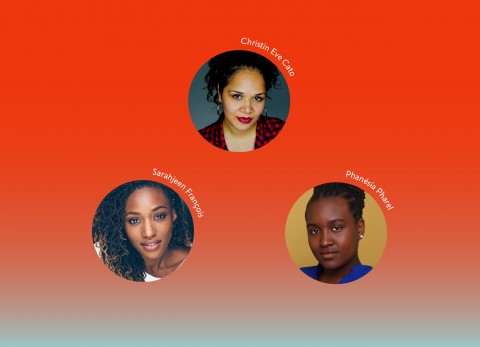 Playwrights’ Center, in partnership with the Kennedy Center American College Theater Festival, is pleased to announce the 2021-22 Core Apprentice Playwrights Christin Eve Cato, Sarahjeen François, and Phanésia Pharel. The program will support these early-career playwrights with professional mentorship and development workshops, furthering their craft and their careers.

“I couldn't be more excited about this new cohort of Core Apprentice playwrights. Christin, Phanésia, and Sarahjeen enter the program with a range of writing styles, professional experiences, and educational backgrounds, but all of their work is imaginative, electric, and deeply moving,” said Sarah Myers, Playwrights’ Center’s director of university programs and partnerships.

She continued, “This is a time of transformation in our field, and recent graduates are grappling with what it means to transition into a professional landscape that's constantly shifting. Our goal is to support these incredible writers as they move through their journeys, at the same time that we learn from their insights.”

Recipient Phanésia Pharel shared, “I am transitioning out of my undergraduate career in a time of great uncertainty. I look forward to developing a relationship with a mentor who can speak to the practicalities of our profession. I also want to make sure I take advantage of all the Playwrights’ Center's resources.”

“Something I’m hoping to gain from my time with the Playwrights’ Center is a network of new and meaningful artist connections,” commented core apprentice Sarahjeen François. “The best thing about programs like this is not only in the opportunity to professionally workshop and present one’s creative work, but also in the relationships built in a cohort who are essentially the next wave of prominent artists. So with that being said, I can’t wait to hear their stories and to be inspired by their artistry.”

“The art of story-telling is the most crucial aspect of culture, tradition, and history,” reflected playwright Christin Eve Cato. “I believe that any piece of art is an archive, and when I imagine a world without these archives, I see a world where no identity exists. Without them, we would be a world with no history of its people, impactful moments, or significant events. An archive is a form of evidence; it increases our understanding of the world around us. Therefore, playwriting is an archiving tool. To write a play means documenting perceived truths, lived experiences, and stories that need to be kept alive.”

Not surprisingly, the other two recipients agreed on the importance of playwriting and storytelling.

“When a story tells the truth or comes from a real place it matters to those it frees. How many of us have been freed by good writing? Too many to list here,” stated Pharel.

François explained, “Playwriting/storytelling is so important because it can be an act of creating portals into distant realms with distinctive perspectives. Though these portals may seem like little universes completely independent from the next, they all link to create full and rich stories of the human experience. I think these stories and portals are what will be the saving grace of mankind. And if there is one thing that I have learned from the year 2020, it’s the importance of creating those portals so that the people who journey into them can see beyond what they thought they already knew about the world. I personally love bearing a gift that allows me to have a hand in the design of a world that artfully portrays life beyond a paradigmatic theatre model, so I take storytelling—and the stories I tell—very seriously.”

Christin Eve Cato is a playwright and performing artist from the Bronx. She holds an MFA in Playwriting from Indiana University and completed her BA degree at Fordham University. Cato is also a graduate of Fiorello H. LaGuardia High School for Music and Art and the Performing Arts. She is affiliated with NYC theater companies, Pregones/PRTT (ensemble member), INTAR Theatre (UNIT 52 ensemble member), and the Latinx Playwrights Circle. Cato's artistic style is expressed through Caribbean culture and the Afro-Latinx diaspora, honoring her Puerto Rican and Jamaican roots. She has developed her work with The Classical Theatre of Harlem, Harlem9, Pregones Theater, Milagro Theatre, Borderlands Theater, Teatro Vivo, Indiana University, Texas State University, Cardinal Stage, Conch Shell Productions, KCACTF, and The Silverton Theatre Mine. Cato is also the 2020 Greater Good Commission recipient for Afro-Latinx writers and the 2021 ReImagine New Plays in TYA grant. An aspiring screenwriter, she is currently repped by 3 Arts Entertainment.

Sarahjeen François is an LA based Haitian-American playwright and performer from Miami, Florida. Her creative work is an exploration of the Afro-mythic and participates in the rich, cultural story-telling practices derived from traditional and contemporary African ideologies. An MFA Acting graduate from the CalArts School of Theater, Sarahjeen’s artistic endeavors have led her to work with The Atlantic Center for the Arts, Castello San Basilio, Will Geer’s Theatricum Botanicum, CalArts Center for New Performance, Teatro Línea de Sombra, Horizon Theatre Company, Peach State Opera, and Out Front Theatre Company.

Phanésia Pharel is a Haitian-American playwright who is currently focusing on the divine metaphysical dilemma of Black and Latinx girlhood. Generally, her plays span revolutions, islands, and Afro-Futurism. Thanks to City Theatre Miami, she discovered her love of playwriting at fifteen years old. Her first play, “Penelope,” was selected as one of four in the nation to be workshopped at the International Thespian Festival and was subsequently published in Dramatics magazine and by Samuel French. One of her favorites, “Shovel Me Away,” was produced at Micro Theater Miami and received the Best Of The Best 2016 award. Her monologue, “My Kid, My Life,” appears in the 2015 City Theatre anthology.

During her time at Barnard College of Columbia University she won four literary prizes. Recent success includes her play “And Other Dreams We Had” which was a finalist for the City Theatre National Short Playwriting award and was selected for Smith and Kraus Best Plays of 2020. Phanésia was also named a Semi-finalist for the 2021 Blank Stage “Future of Playwriting award”, Semi-finalist in the 2021 Bay Area Playwrights Festival and a Finalist for the 2021 Jane Chambers Feminist Playwriting award. She has developed several pieces with Conch Shell Productions and works as a Teaching Artist for ViBe Theater Experience. In 2020, she was Artist in Residence for New York Stage and Film and a National Young Playwright Residency for the Echo Theater Company of Los Angeles. At the moment she is under commission by Thrown Stone Theatre and is a member of New York Stage and Films NYSAF group. Last but certainly not least Phanésia is a proud member of the Dramatist Guild of America.