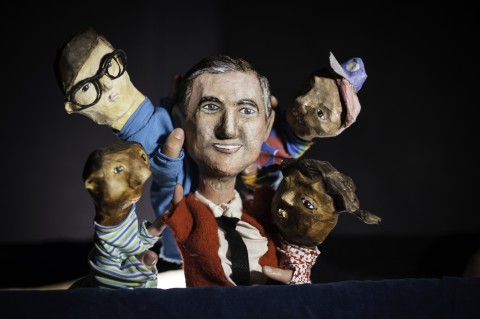 In the Heart of the Beast Puppet and Mask Theatre (HOBT) is the ideal location for a show inspired by Mister Rogers, being somewhat of a Neighborhood of Make-Believe itself. Climbing the stairs you are greeted by an elegantly cloaked character with a large, deep-blue face, a fish that appears to be made of paper lanterns, a giant recreation of a mustard bottle, and other characters of Mayday Parades past before reaching Bart Buch’s office. Buch is the Director of Youth & Community Programs at HOBT, as well as a 2017-18 McKnight Theater Artist Fellow at the Playwrights’ Center. His office at HOBT is an old projector room with bright yellow and green walls, ample plant life, and appropriately, a mug with Mister Rogers’ friendly face printed on it, resting on his desk.

“I loved Mister Rogers as a kid,” Buch begins, “and as an adult, I have so much respect for him, because a part of my mission in life is to work for kids. His particular slant is so unique, and I feel like we have so much in common—he was a puppeteer, he loved music—and so I’ve always wanted to honor him and do a show about him.”

Buch has been working on this show, Make Believe Neighborhood, for the past two and a half years, and it opens February 2 at HOBT. To create the show, he began with the surrounding Phillips neighborhood and the people who live and work there, his neighbors.

“Mister Rogers talked a lot about neighborhood helpers. And Phillips gets such a bad rap all the time, but there are also just incredible, incredible people doing these incredible, incredible things. It’s one of the most diverse neighborhoods in the country and I really wanted to hold the positivity and richness of that because we are so lucky. But that’s not what is reflected, so I thought, ‘I’ve got to do this for me and for my neighbors so we see our context in a different way,’ because it’s so hopeful to see all these people helping.”

The process of creating the show is equally aligned with the ethos of Fred Rogers, having been developed with the help of the youth involved with HOBT’s Phillips Project, a program dedicated to reaching beyond socio-economic barriers to provide community-oriented arts programming for all children. The participants in the Phillips Project are, of course, the youth living in the Phillips neighborhood, and were an integral part in gathering the stories that will be featured in the show. Throughout the years of gathering neighborhood helper stories, some of the young artists of the Phillips Project would work with Bart to interview people around the neighborhood, moving towards creating their own shows and movies about the collected stories. These projects not only helped to inform the upcoming show, but evolved into a theme in the arts curriculum of the Phillips Project.

Make Believe Neighborhood currently has seven chapters. Each chapter is about a different aspect of Fred Rogers’ life, paired with the story of a collaborating neighborhood helper. Bart Buch’s shows rarely have many, if any, words, and rely instead on music and images. He has collaborated with choruses, string quartets, DJs, and, for twelve-plus years, multi-instrumentalist Martin Dosh. Dosh is behind the music of this show, which features covers of songs from Mister Rogers Neighborhood. Make Believe Neighborhood will also feature music from Andrew Bird, Sylvan Esso, Dallas Johnson, Leslie Ball, Jayanthi Kyle, and MPLS imPulse Chorus. The stories of both Mister Rogers and the surrounding community will be told primarily through visual and musical elements.

“One thing that I love about puppets,” says Buch, “is that you don’t need spoken language, a lot of the time. The puppet movement, the music, and the visual language can tell its own story and hit a more poetic note in people’s consciousness.” This show features more than one hundred puppets, some taking over one hundred hours to build, making Make Believe Neighborhood Bart Buch’s biggest project to date.

The incredibly labor intensive nature of the puppet process raises the question, why tell the story with puppets in the first place? A question to which Bart Buch has a passionate and profound answer deeply rooted in play. Not only does the connotation of puppets being toys ignite that playful part of the imagination, in kids and adults alike, but puppets are uniquely able to be projected upon. He explains, “When the audience is so able to project on something, it really opens them up emotionally. You have to play into that make believe aspect that everyone has, and that’s the puppeteer’s job: to make people believe.” Who better than Bart Buch, advocate of imagination and community, to pay homage to the creator of the beloved Neighborhood of Make Believe himself?

Over the course of our hour-long conversation that covered everything from the construction of puppets to the importance of hyper-local theater, it became increasingly clear how ideally suited Buch is to be a McKnight Theater Artist Fellow at the Playwrights’ Center, a place fueled by the belief in the power and importance of telling stories.

“Sometimes you wonder: as artists, are we doing anything? Shouldn’t we be out doing something more important? But I think, no, we just have to keep reminding ourselves that we’ve got to tell stories, because that’s what changes things,” Buch says.

Buch plans to use the fellowship to build more connections with musicians, both locally and internationally, to pursue new collaborations exploring puppetry in relation to music. In the meantime, he spoke about how the fellowship has cultivated a greater sense of community for him. “It gives a really nice core feeling of being part of a community and knowing that you have a valued place in it, which is really great because I can get so siloed in the puppet world. It opens you up to the community and your part in it.”

Make Believe Neighborhood runs from February 2 to 25 at In the Heart of the Beast Theatre.

The application deadline for 2018-19 McKnight Theater Artist Fellowships is April 12.