The final play in our 2017-18 Ruth Easton New Play Series is the bandaged place by Core Writer Harrison David Rivers, with readings April 9 and 10, 2018, at the Playwrights’ Center. In this interview, Associate Artistic Director Hayley Finn talks with Harrison about writing from his pain, the characters of the bandaged place, and his inspirations. Reserve your tickets to the bandaged place »

How would you describe the bandaged place?

This is a story about an African American man, Jonah, who is struggling to heal after being physically abused by his lover. In the world of his healing, he has a grandmother who wants the best for him, wants to support him, wants to take care of him, and an eight-year-old daughter who just wants her “daddy” to be okay. The play follows Jonah as he navigates these relationships.

What is drawing you to explore domestic violence?

When I started at Columbia in 2006, I was in a relationship with a man that became physically abusive and resulted in me being beaten and stabbed.

I wrote the bandaged place at the suggestion of my therapist. I would go to meet with her and I would just sit there in her office unable to articulate my feelings about the experience. She said to me, “Maybe you should try writing a play.”

Discussions of domestic violence in America look mostly at the way men and women are treating each other, but same-sex couples are experiencing these very same traumas—and at statistically higher rates. For me, part of telling this story is to draw attention to the issue. To shed some light on a section of our population that is experiencing something that’s very difficult. A population that might not be inclined to speak up for various reasons. Fear. Further marginalization. Shame.

My thinking is, if I share my story, maybe it will encourage others to do the same.

I love the title the bandaged place. Tell me about your process for selecting it.

The title is from a quote by Rumi that says, “don’t turn away, keep looking at the bandaged place, that’s where the light enters you.” When I was younger it was a quote that I kept coming back to. I didn’t necessarily understand it, it didn’t hold any deep meaning for me, but I was struck by the words. While I was writing this play, bruised and walking with a cane, the quote came back to me. And when it did, it spoke directly to my heart. Rumi’s poetry was no longer simply a collection of beautiful words, it was an exhortation! For me it means, don’t look away from your pain, don’t disengage from it, because that pain is the source of your power.

I fell in love with the character of the young girl, Ella. She seems so truthful and beautifully rendered. I wondered how she came to you.

I felt like the story needed “lightness.” I mean, the subject matter is pretty heavy. So I thought, “How can I bring a bit of levity to the proceedings?” And the answer turned out to be Ella.

She’s a talented dancer. She’s precocious. And she’s observant, though she doesn’t always understand what she sees. In the play, one minute she’s unwittingly tugging at your heartstrings and the next, she’s got you rolling on the floor with laughter. She’s definitely one of my favorite characters that I’ve written.

There’s a moment that she has with her father at the end of the play. It’s quiet and pure. And hopeful. My plays don’t always end hopefully, but this one does, and I think Ella’s presence is a really big part of that.

You write plays in many different styles. How do you get into these different mindsets?

I feel like the subject matter really determines the style and tone of each play.

In the case of The Sea & The Stars, which was workshopped as part of the Ruth Easton Series last season, I was in a sad place when I wrote it, and I thought, “Well, I’m sad, so it must be a sad play.” But then I heard it read aloud, and everybody was laughing, and I realized, “Oh, it’s a comedy.”

The writing process for This Bitter Earth was completely different. Ed Decker, the artistic director of New Conservatory Theatre Center in San Francisco who commissioned the piece, said to me, “What if the play was about the experience of the Black male body in America?” And I felt so many things about that prompt. So many seemingly contradictory things. And so the play emerged out of order. Scene 1 wasn’t necessarily the first scene of the story, but it was the first scene of the play. Scene 2 didn’t chronologically follow Scene 1. This fragmented structure mirrored my complicated feelings about the subject matter, and it mirrored what I saw when I looked at America.

Mindset-wise, I’m one of those writers who hears characters’ voices in my head, so… they make sure that I know who they are and how they speak, who they speak to (and who they don’t speak to), and what they want.

Who have been your greatest influences?

I would have dropped out of graduate school if it hadn’t been for Charles Mee. He took over the playwriting program at Columbia my second year and he changed my life. He opened up the storytelling world for me. He said, “Harrison, anything can be a play. Do not limit yourself, and do not let anyone tell you that what you’re writing doesn’t matter.”

Speaking of inspirations, I know that you are going to be teaching. What you are hoping to impart to students?

I’m going back to teach at my undergrad, Kenyon College, in the fall. I think it’s important to talk with students—and especially students in the arts—about what being an artist might look like for them when they graduate. I feel like when I left school, I had no idea what to expect. I mean, I knew I wanted to make art, but I wasn’t sure how to go about it. I’d like for my students to leave my class with a plan (and a plan B).

I also always want to encourage my students to look beyond the boundaries of the institution, to seek out plays and other performance material that isn’t being taught in their classes. It’s a big world. There is more out there. Go find it!

Reserve your tickets to the bandaged place » 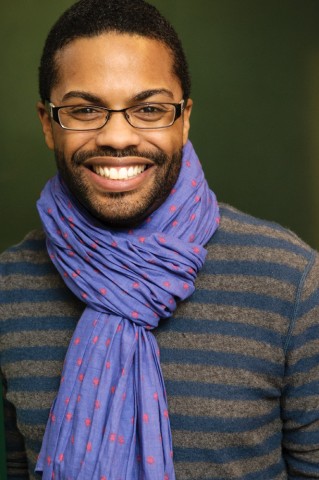