Your play, The Overcoat, is based on Gogol’s short story. When did you become familiar with this story, and how did you decide to adapt it?

Well, it’s a famous story in world literature. Dostoyevsky even said, “Everything comes from Gogol’s story, The Overcoat.” I love Gogol—he looks at class and poverty and the human struggle with an absurd sense of the divisions in society. I’ve wanted to adapt this story for a long time.

Why a musical? How did you decide to incorporate music, and how do you view its role in the piece?

When you adapt anything—a novel, short story, or other types of fiction—one of the most difficult things to get at is the interiority of the story. Which, of course, is something fiction is filled with, but in drama, we have to do everything with action and dialogue. A musical felt like a good match for the tone, style, and journey of the story.

Also, for many years, I’ve wanted to work with the composer Brian Harnetty, whom I met at a teaching residency in Vermont. His work is very minimal, haunting, and non-musical sounding. We started with the parameter of “music for non-musical people.” We wanted to make the musical somehow more accessible—maybe, we wondered, we could make a theatrical experience with music that didn’t require the big guns of orchestration and highly trained voices? We wanted to see how we could make the story appear simple—when, in fact, it’s very complicated in terms of the emotional territory it covers. We’ve ended up with the description, “a low-fi musical,” which evokes the idea of an analog musical in a digital age.

Class is one of the major themes in Gogol’s story. How do you think your adaptation will resonate today?

Well, the story is famous for its depiction of a moment of compassion and empathy. I’m probably wrong about this, but it might be the first work of literature that shows a very important person undergoing a kind of change of heart. One of its core questions is how do we tap into our empathy when the system seems cruel and unable to grant basic human needs to a lot of the people within it?

The story is very simple. It’s about a man, a very poor worker, a clerk. He lives in Russia, so it’s very cold, and he needs a new coat. But he can’t afford one. When he finally figures out how to buy a new coat, all the people who’ve essentially dissed him his whole life suddenly see him for the first time—because he has a fancy new coat. He attends a lavish party, and then on the way home, the coat gets stolen. He asks for help from the bureaucracy, the people, his boss, but he gets no help and dies. We’ve taken some liberties in the musical, filling out the story with other relationships and the dreams and hopes of the central character—for example, I had fun thinking about how to theatricalize the force of Winter.

What are some things you want to work on as you develop the play at the Center?

I think we want to figure out how to make the musical live as something “low-fi”—can we add some simple instruments alongside the piano? How does the singing happen? How much music should the piece have?

As with many of your pieces, the images are extremely evocative. Did you begin the play with an image in mind?

Because it has kind of a very simple framework, I decided I wanted to be as theatrically imaginative with it as I could. The coat is a very important image, and it becomes a kind of character. Then there are ghosts and threads and spun sugar and shit and winter and capturing time and a lot of other evocative images we found in both the text and in the texture of the music.

What are some of your favorite images?

I love the image of the spun sugar because it’s so fragile and sweet. It works beautifully to capture the love affair and how quickly it disintegrates when the forces of cruelty and cold appear.

Have you adapted other works of Gogol’s?

No. But I have adapted other works of Russian literature. I like the canvas of the Russians.

What attracts you to the Russians?

I come from a Russian family, so I really understand the fluctuations in emotion in Chekhov or Gogol or Dostoevsky. You can be jubilant at the start of a sentence and incredibly despondent by the end of the sentence. There’s an absurdity in the Russians that I understand instinctively—they laugh at misery, while at the same time they surgically explore it, which appeals to my sensibility. Gogol’s really a master of tone. I think any writer is astonished by the choices he makes, the style of the story, and how much it has to say about the human condition.

Over the years we’ve discussed how you develop plays with an audience in mind. Who were you thinking of as you wrote this play?

I started the writing thinking that it might be one of the Ten Thousand Things (TTT) plays for my Mellon residency, and then another play came in and took its place. So I began the play first thinking about this huge range of people who exist within TTT’s reach. TTT is a theater that believes everyone should be in the audience. It performs for people who are typically marginalized by society, who don’t have access to the theater. We might take a play to incarcerated audiences, low-income centers, shelters, or chemical-dependency centers. Then it also goes to a theater-savvy, paying audience. You get an amazing spectrum of humanity witnessing the work. And when you assume it’s not just going to be one of those well-heeled audiences, it always does something to the story you want to tell—it expands and deepens it.

Then, because of the election and the tenor of society right now (don’t get me started), the play began to feel as if it illuminates what life is like for people who don’t have a cushion or don’t have a margin of error.

What else are you working on? I know you’re always balancing many different projects.

I have a lot fun things going on right now. I’ve been working for about two years with a group of TTT performers, including Michelle Hensley and Luverne Seifert, to devise a play called Park and Lake. It’s about a car wash, and it’s been really fun. I’m working on another piece—an adaptation of Deborah Jiang-Stein’s memoir, Prison Baby—that I’m writing for Twin Cities actor Shá Cage. And then I’ve also been working on a puppet screenplay, a TV series, and a film.

I want to return to your affinity for visually imagery. You started as a visual artist and then later began writing plays. How did you come to playwriting?

I moved to Minneapolis because the Minnesota Center for Book Arts is here. I think I was their first intern. They had just opened, and I’d been making artist’s books. I would often use historical figures—like Houdini or Madame Curie—and imagine fictional biographies of them through images and text. At some point, I began to wish my characters could talk to one another, and then I stumbled upon the Playwrights’ Center. I took a class. And so I started writing plays!

Reserve your free ticket for The Overcoat: A Low-Fi Musical » 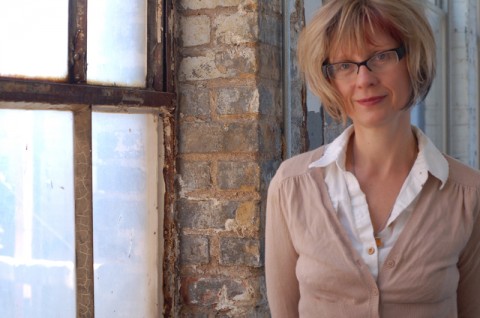