PlayLabs 2017 features three new plays, including Core Writer Jen Silverman’s In the Time of the Volcano. Readings are Wednesday, October 25, and Saturday, October 28, at 7 p.m. Reserve your tickets here. We talked with Jen about reading, writing, and rewriting.

Your PlayLabs play In the Time of the Volcano is a fictional story inspired by true events. How do you approach writing that kind of story?

Very gingerly. In the case of Volcano, it’s inspired by the story of an actual religion, but not by any events that I know of. And the play isn’t even about this specific religion, it just prompted me to ask a series of questions about disempowerment, identity, and pride that turned into this play. So, much of Volcano occurs in a space of pure invention and extrapolation, but is grounded in contemporary events.

A number of your plays live in an absurd kind of space. What draws you to writing in that style, and what does it let you explore?

I think plays that are slightly askew, that invoke a certain level of strangeness and fluidity, plays that shapeshift a little—these are the plays that (for me) often speak most powerfully to our current cultural condition. Theater for me is a space of constant possibility. I want to be shown the familiar in unfamiliar ways, and I want things that seem daily and banal to be shown to me in ways that render them alien and new. I find it harder to create these experiences within the strict bounds of realism, although of course it’s possible, and there are playwrights I love who do this very successfully.

That being said, the structure of Volcano borrows heavily from an Arthur Miller/O’Neill’s Long Day’s Journey/American Family Play structure. It appropriates a certain brand of realism in order to have a conversation about white masculinity, which is of course embedded in that aesthetic.

I end up writing in the kitchen a lot. Am I subliminally waiting for someone to show up and feed me?

It’s different for each play. But I can’t write until I’m interested in a character. And then after a certain number of pages, I can’t keep writing until I know what questions I’m asking.

What’s the weirdest phrase you’ve Googled when researching a play?

Answering this will put me on an NSA watch-list (if I’m not already), so all I’m gonna say is: IT WAS JUST RESEARCH, GUYS. I’m harmless.

What is your relationship to rewriting? Are you a 50-drafts writer or a first-draft-is-pretty-close writer?

I believe firmly in the powers of rewriting. Sometimes I write three or four drafts before I let someone read the play, because with each draft I can tell I’m getting closer to where I’m going. Sometimes I’ve gotten as far as I can with the first draft, and then I need collaborators to help shine a light on what the next set of drafts needs to be.

Finish this sentence: If I weren’t a playwright I would be…

If I weren’t a playwright I would be the person whose job it is to hug all the sheep, one by one, after they’ve been shorn. If this is not already a job, I would invent it.

What is something from outside of the theater world that inspires your theatrical writing?

That word sounds so familiar… but I can’t quite place it.

The desire for transformation—of ourselves, of our world. What happens when we fail… or when we succeed. The inherent violence of certain social structures, and the specific kind of intimacy we create within them. Family—familial memory, legacy, how we position ourselves or are positioned within our families. Visibility—how we are seen by others, how we struggle to see ourselves. How we try to love each other, and all the ways in which that leads us down strange and twisty paths. That’s some of it, anyway.

Who is a current playwright you love, and why?

Basil Kreimendahl is a brilliant writer—I’ve been a big fan for years, since we were getting our MFAs together at the Iowa Workshop. Basil’s work unapologetically takes place at the intersection of gender, class, and queerness, and Basil puts characters on stage that you don’t otherwise see. Sidewinders is one of my favorite plays on the planet—it is a queer Western that uses the territory of gender identity as the Wild West. Orange Julius is another play I love, about the relationship between a dying Vietnam veteran and his youngest child, Nut, who’s trans-masculine. I can’t think of any plays quite like Basil’s—these plays are vital, funny, sexy, heart-breaking and deeply human. 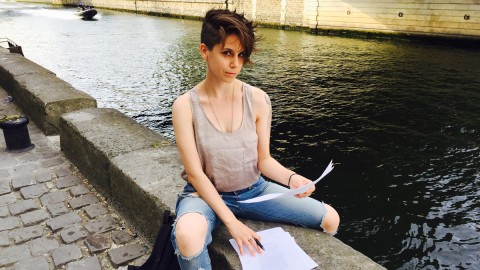