Amid scarcity, abundance: Announcing the 2023 Core Writers at the Center

MINNEAPOLIS (June 28, 2022) — Playwrights’ Center is pleased to welcome a diverse group of playwrights who demonstrate a sustained body of work, commitment, and attributes of artistic merit.

The 2023 new Core Writers are Steph Del Rosso, Rachel Jendrzejewski, Nick Hadikwa Mwaluko, AriDy Nox, Matthew Paul Olmos, and SEVAN. The Core Writer program annually gives a selection of the most exciting playwrights from across the country the time and tools to develop new work for the stage. Each term is three years with the opportunity to reapply for additional terms. All Core Writers receive play development workshops with the Center, in collaboration with prominent directors, actors, dramaturgs, and designers.

"In a moment where our world is spinning faster than ever before, I couldn't be more thrilled to support these six writers and their work,” says Playwrights’ Center Producing Artistic Director Jeremy B. Cohen. “Their voices are urgent, funny, really moving, and incredibly theatrical - I look forward to them guiding us forward with their work and leadership over the next three years."

Playwrights’ Center Associate Artistic Director Hayley Finn spoke to both the urgency and opportunity of the current moment: “At this pivotal time when we are venturing to reimagine the theater forward, I am inspired by these artists and their distinct and crystalline visions for the theater. I am delighted that we can provide sustained support to develop their next theatrical works.”

In addition to development support provided by the Center, Core Writers are eligible to be included in Playwrights’ Center’s formal season of public readings: the PlayLabs festival, the In The Lab Series, and the Ruth Easton New Play Series. Core Writers are also promoted by the Center and provided opportunities through an extensive network of colleges and universities, cultural institutions, and producing theaters.

“In an industry often defined by scarcity, the abundance of a three-year term is a unique gift. I'm so grateful for the Core Writer program's commitment to process and growth - to nurturing an artist's body of work rather than a singular project” says Core Writer Steph Del Rosso. “I'm really excited to build relationships with a new community of brilliant theatermakers.”

Steph Del Rosso writes plays, fiction, film, and television. She is a winner of the Steinberg Playwright Award. Her work has been produced or developed at Second Stage, The Kennedy Center, La Jolla Playhouse, Studio Theatre, Repertory Theatre of St. Louis, Alliance Theatre, Ojai Playwrights Conference, Oregon Shakespeare Festival, JACK, and others. Steph was the Shank Playwriting Fellow at The Public Theater, a Theater Masters Visionary Playwright, and is an alum of the Soho Rep Writer/Director Lab and Clubbed Thumb’s Early-Career Writers’ Group. She is a New Georges Affiliated Artist and currently teaches Playwriting at NYU. MFA: UC-San Diego.

Rachel Jendrzejewski (she/her) is an experimental playwright who collaborates with choreographers, musicians, and visual artists to explore expansive interdisciplinary vocabularies. Her work has been developed and/or presented by Red Eye Theater, Walker Art Center, Hair+Nails Gallery, Weisman Art Museum, Joe's Pub at the Public Theater, MASS MoCA, and Tricklock Company, among others. Published texts include ENCYCLOPEDIA (Spout Press) and IN WHICH _______ AND OTHERS DISCOVER THE END (with SuperGroup; Plays Inverse). She is a Playwrights’ Center Core Writer, 1 of 7 artistic directors at Red Eye, and adjunct faculty at Minneapolis College of Art and Design. MFA Playwriting, Brown University.

Nick Hadikwa Mwaluko: 3rd-culture, non-binary, trans, queer Tanzanian-American raised in East and central Africa currently in the USA. Nick was recently awarded the New Visions Fellowship for Black Gender Non-Conforming and Trans Playwrights by the Dramatist Guild of American and National Queer Theater. Nick is a member of Playwright Foundation’s Resident Playwright Initiative. Nick was a member of The Public Theater’s (NYC) Emerging Writers’ Group (EWG), Crowded Fire Writers’ Lab (San Francisco), and other residencies. Plays include Waafrika 1-2-3, They/Them/Theirs, Silence Is A Sound, Asymmetrical We, Blueprint for a Lesbian Planet, Homeless in the Afterlife, 37, S.T.A.R: Marsha P. Johnson, Jizz, Pence At the Border, and more.

AriDy Nox is a multi-disciplinary black femme storyteller and social activist with a variety of forward-thinking creative works under her/their belt including the historical reimagining of the life of Sally Hemmings BLACK GIRL IN PARIS (2020), the ancestral reckoning play A WALLESS CHURCH (2019), the afrofuturist ecopocalypse musical METROPOLIS (2019), and many others. AriDy creates out of the vehement belief that creating a future in which marginalized peoples are free requires a radical imagination. Their tales are offerings intended to function as small parts of an ancient, expansive, awe-inspiring tradition of world-shaping, created by and for black femmes. 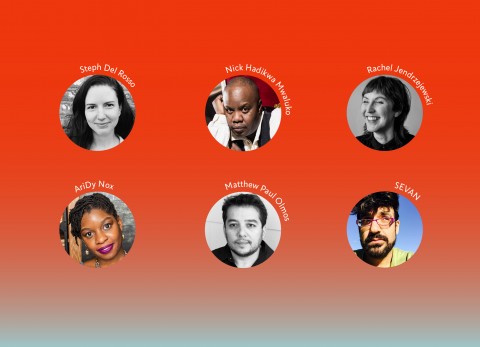