Second-year Core Writer Gabrielle Reisman is at the Playwrights' Center this week, continuing her work from last year on Next Year People with collaborators Katie Bender and Rachel Mars. (Read more about the piece from last year's workshop.) Join us Tuesday, December 19 at 11:30 a.m. for an informal showing/open rehearsal and to hear the artists talk about their work.

Learn more about Gabrielle in this interview:

What advice do you have on creating an artistic community?

A big part of a healthy arts community is just showing up for each other's work. See friend's shows, see strangers' shows, but also get out to some art openings, some live music, and dance. Expand the arts you eat, and when you see something you dig, seek out the people who made it and befriend them. Then tell everyone else how great it is.

Become a connector of people and stuff. Let those folks you befriended know about cheap rehearsal space, talented actors, or borrowable materials. Every artistic community is only as strong as its shared resources.

Can you tell us a bit about Next Year People, the piece you are devising with Rachel Mars and Katie Bender?

Next Year People is a three-person play about our personal desires to lead multiple lives in the rising shadow of social disintegration. Part truth, part fiction, part dance, part dinner party, it follows a trio of women artists as they try to build a utopia together in the ruins of a sub-tropical hotel.

Katie and I have been working together as part of the collective, Underbelly, since 2013. We met Rachel on a residency in 2015 and have been kicking around ways of collaborating since. Because we're all separated by geography, the creative process for Next Year People mirrors its content somewhat—there's a lot of sketching grand plans onto an unknown of future that feels at turns harrowing and hilarious. I'm excited to get back in a room with these two.

I love the challenge and structure inherent in writing about history. I also love research, so I tend to dive deep into reading, watching, and listening to as much as I can about a web of connected subjects. I take notes and look for material to lift, things that are funny and contradictory. I'm interested in the way history is a prism for the present.

I wrote Flood City, a comedy about the 1889 Johnstown Flood, as a way to explore living in New Orleans in the wake of Hurricane Katrina. I'd spent a the better part of the previous year trying to write about it through the lens of a fictional disaster and was getting nowhere. Everything felt heavy and muddled. Through Johnstown, I was able to see the recovery I'd been through in starker and more ridiculous relief. It was liberating, the way that distance, in this instance, gave me clarity on the recent past.

What are you working on this year?

I'm currently working on Jeune Terre (formerly Pattern Seeking Animals), a commission of EST/Sloan Foundation and New Plays at Barnard. Jeune Terre looks at land loss/sea level rise and the way it affects a small community in the Louisiana bayou.

I'll be working on Next Year People in collaboration with Katie Bender and Rachel Mars and doing some work on Flood City for its second production with Theatre Alliance in DC this spring.

In there somewhere, I'll be starting a new play. Right now I think it's an adaptation of something from the 1800s and deals with the ways women move through the world, something I've been thinking about a lot since the election. I'm hoping it will be funny.

It varies. Sometimes I write in coffee shops—especially for first drafts when I'm trying to not overthink. Sometimes I sit in coffee shops and listen to a loop of outdoor park sounds—birds and cars and such. I tend to rewrite in quiet spaces—my desk in NYC or kitchen table—somewhere I can best hear what's already on the page.

As I said, I like research, sometimes to a fault, so will read and listen and write down things that feel important to the world of the play in various notebooks that I then tend to lose. I'm overly motivated by deadlines (by which I mean I'm a procrastinator) so I tend to work in blocks, writing all day for two weeks or so, then setting it down once I have a draft out. I don't outline, so I usually don't know what's going to happen until it's there on the page. I'll also make a show-specific playlist of songs that allow me to visualize scenes or get into a space where I can best hear characters. If there's time before a deadline, I like to print out pages to edit with pen. The experience of reading a play on paper is always different than reading it on a screen.

Describe and “aha moment” or moment of discovery you’ve had.

These aha moments are what keep me writing. They're more delightful to me than any other part of making plays. The first aha moment I ever had was in high school. I was writing what I thought would be a short skit about several kids around a fire pit when it exploded out into a full length play. The moment I could see the world stretch out beyond the fire felt like stepping through a door and into a secret. I feel so lucky to have a job that requires continuously stepping through doors.

Driven. I created a child nation state with the kids in our neighborhood and served two terms as president. A few of us acted, so I would call up agents in the phone book and leave messages for us to be taken on as clients. Every day there was something to build—a shanty city, a door-to-door tie selling business, or an olympics. If I wasn't physically making something I was making up stories—long epics to tell my brothers about a truck driving hamster or grand and endless stories to tell myself, plotting out conversations. Don't know that I'm all that different.

What is something you’ve never seen onstage but would like to? 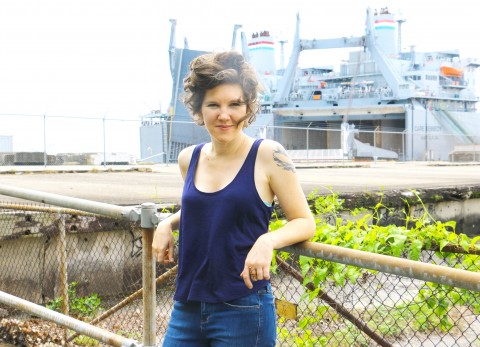