On March 11, we hosted a Member Stage Reading doubleheader when Randolph College student Grace Gardiner and professor Gary Dop traveled to the Playwrights’ Center for readings of their new plays in progress. Randolph College is part of New Plays on Campus, an institutional membership program to connect colleges to playwrights, and students to the world of professional playwriting.

As Playwrights’ Center members, Dop and Gardiner have access to our One-on-One with a Dramaturg program. They applied to a summer research program at Randolph that provided funding for them to work on their plays with each other and in consultation with dramaturgs. Gardiner worked on her play The Good Guy with dramaturg Christina Ham and Dop worked on his play Memorandum of Understanding with dramaturg Dominic Orlando.

Gardiner and Dop then applied for and received a second round of funding from Randolph to travel from Virginia to Minneapolis for readings of their plays through the Member Stage Reading program. On the 11th, both plays received public readings performed by some of the Twin Cities’ best actors, followed by in-depth conversations among the playwrights, actors, and attendees.

Gardiner says the experience of the reading was like “an amazing dream. It was just so professionally done. Having professional actors who have been in workshops like this before let me focus on the script; I could really tell the parts where it felt like it was going well and the parts where it was not jiving for me.”

Gardiner continues, “I am pretty new to playwriting and for me this experience was an affirmation that this is what I want to do. I want to be in this environment, and move into the writing life, the writing career. It helped show me another level of professionalism and make new contacts. As a senior, I feel like I’m coming into my own now. Being able to interact with these professionals who are high-caliber creative people who do this for a living—having these enriching conversations with them—it’s something invaluable that you can’t get in the classroom.”

Dop, who has been a member of the Playwrights’ Center on and off for many years, was thrilled to have this opportunity to develop not only his own work, but that of his student’s. “It is incredibly affirming to a young writer to do something that many other people don’t get a chance to do for another decade of their writing life. For her to know that, yes, she has to work to do, but also she’s in the game and getting out there as a writer, to me that’s wonderful.”

As for his own reading, Dop says “I felt tremendously alive to sit in the corner of the room and feel my play coming alive in the actors and audience. This is very experimental, the kind of play that I’m trying, so I needed this experience to tell me ‘OK, I can see this taking flight eventually.’ For me, the Playwrights’ Center is the best place in the country to test out a new work in this phase. Today was an absolute joy.”

Learn more about the New Plays on Campus program » 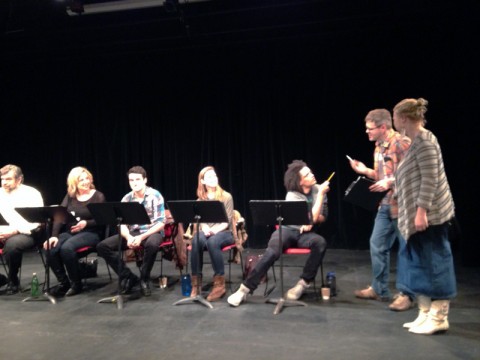