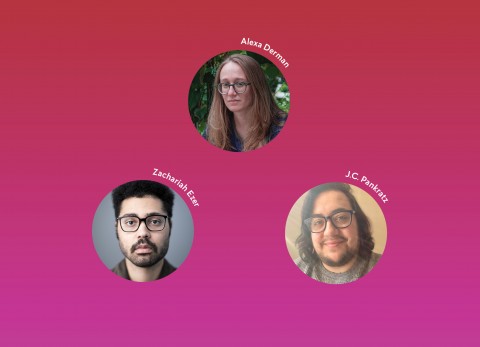 Playwrights’ Center, in partnership with the Kennedy Center American College Theater Festival, announces our 2022–23 Core Apprentice Playwrights: Alexa Derman, Zachariah Ezer, and J.C. Pankratz. These early career playwrights will receive support over the course of the next year that nurtures their artistry and advances their careers.

University Programs and Partnerships Associate Shalee Cole Mauleón expresses the enthusiasm of Playwrights’ Center’s entire staff when she says, “It is a joy to welcome this year's trio of Core Apprentices. Their work runs the gamut from intimately lyrical, to audaciously interrogative, to unflinchingly satiric. The Playwrights' Center and I are honored and eager to gather this cohort together to support their powerful writing.”

She also reaffirms the importance of the Core Apprentice program, pointing out that, “For a playwright's career, one of the most critical times is the transition from the academic to the professional. By pairing the Core Apprentices with working artists in their field, this program sets the stage for Alexa, Zachariah, and J.C. to flourish in their craft and careers."

The Core Apprentice program provides each recipient an intensive workshop to develop their play alongside actors, a dramaturg, and a director; professional mentorship with an established playwright; opportunities to engage with the Playwrights’ Center community; Playwrights' Center Membership for two years; and other professional development and educational opportunities.

Core Apprentice Alexa Derman points out that this program can serve as a metaphor for what it means to be a playwright: “I think being a playwright is always being a kind of apprentice—I always want to be challenging myself, growing, pushing myself a little further. But I think being a Core Apprentice means, to me, taking that next step into the professional world—beginning to see myself not just as a playwriting student, but as a playwright.” She goes on to highlight how the program will help her launch her playwriting career: “My time as a Core Apprentice will coincide with my last year of my MFA at Brown; this program will (hopefully) make the transition out of my MFA feel less terrifying and more exciting by providing professional guidance and support.”

Recipient J.C. Pankratz is also excited for the supportive community that the program provides: “It's a tremendous honor to join the Playwrights' Center as a Core Apprentice. Community is key for me in all things, and being in space with a mentor, other writers, theatremakers, and the dedicated staff of PWC brings a near-electric excitement.”

Likewise, recipient Zachariah Ezer notes his enthusiasm to spend a sustained period of time developing new work: “I am really looking forward to digging into my play for the next nine months, with dramaturgical support from an experienced playwright!”

Alexa Derman is a playwright from Jersey. Her plays include PSYCHOPSYCHOTIC (Relentless Award Honorable Mention), GIRLISH (Fresh Ink Theatre), RESTORATION MASTER RESET (Cutting Ball in WAYS TO LEAVE A BODY), and I’LL BE IN MY HANUKKAH PALACE (sold-out at Ars Nova ANT Fest). She’s been a finalist for Playwrights Realm’s Writing Fellowship, the Starr Reading Series, Pegasus PlayLab, Kitchen Dog New Works, and Unicorn Plays-in-Progress; semifinalist for Bay Area Playwrights Festival and the O’Neill. Other honors and experiences include Fresh Ground Pepper's BRB retreat, nomination for the Cherry Lane Mentor Project, a residency with StageFemmes at Kenyon College, selection as a 2019 Lambda Literary Fellow, and at Yale the Marina Keegan Award for Excellence in Playwriting. Her work has been developed with Cutting Ball Variety Pack, Fresh Ink, and Orchard Project Audio Lab. She is currently commissioned by Manhattan Theatre Club via the Sloan Foundation. BA from Yale in Women's, Gender & Sexuality Studies. Alexa is pursuing her MFA at Brown, where she is a member of the Brown-RISD Game Developers and recipient of the Lucille Lortel Playwriting Fellowship. She also makes weird digital things. alexaderman.com