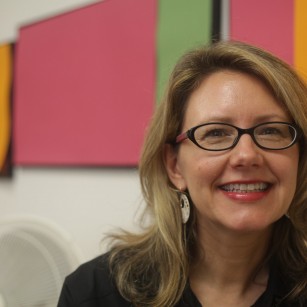 C.S. Hanson's plays have been produced in New York City at Cherry Lane, Theater for the New City, The Brick, Metropolitan Playhouse, Estrogenius, and 3Graces; in Miami at City Theatre; in Washington, D.C. at The Source; in Pittsburgh at the New Works Festival; in Denver by The Three Leaches; and in Montreal by Gleams Theatre. Her work has been seen in two International Fringe Festivals: Montreal and New York. Hanson's work has been developed thanks to The Lark, The Cell, Lake George Theater Lab, EST, LaMaMa, Abingdon Theatre, Naked Angels, and New Jersey Rep. Hanson's short play STALK ME, BABY has been produced at universities and colleges throughout the U.S. and in Australia.

In early 2020, Hanson was an artist resident at The Cell Theatre in New York, where her play I COULD NEVER LIVE HERE had a 29-hour reading, directed by Kira Simring. In spring 2020, several of Hanson's short plays were produced via Zoom, including SHORT LEASH in the Coronavirus Play Festival (directed by Annie G. Levy, Emerson College); STALK ME, BABY in the Women in Comedy Play Series, KIT International (director, Carlotta Brentan; producer, Laura Caparrotti); and DOUBLE D (director, George Ferencz, Theater for the New City).

Hanson has received commissions from LaMaMa, Theater for the New City, and America-in-Play. She was a Tennessee Williams Scholar at the Sewanee Writers' Conference and has been a four-time Heideman Award finalist at Actors Theatre of Louisville. Her work is published in anthologies by Smith and Kraus and by Applause Cinema and Books. After receiving a scholarship from Writers Boot Camp in Los Angeles, Hanson wrote the screenplay JUST SAY YES, which was further developed at Lake George Theater Lab. She leads writing workshops at the New York Society Libraary and lives in New York City. Proud member of the Dramatists Guild of America.