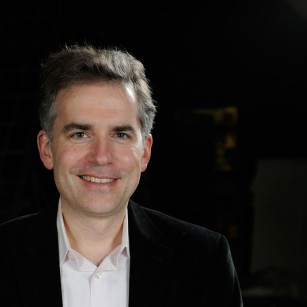 George Brant's plays include Grounded, Marie and Rosetta, Into the Breeches!, The Prince of Providence, Tender Age, Elephant's Graveyard, Grizzly Mama, The Mourner's Bench, Good on Paper, Any Other Name, Salvage, Three Voyages of the Lobotomobile, Night of the Mime, One Hand Clapping, and Dark Room. His scripts have been produced internationally by the Public Theater, the Atlantic Theater Company, Cleveland Play House, Trinity Repertory Compaany, the Studio Theatre, the Alley Theatre, Milwaukee Repertory, Westport Country Playhouse, London's Gate Theatre, Page 73, and Edinburgh's Traverse Theatre, among others.

When Martín applies for a position at the local Walmart-turned-Detention Center, he is dismayed to discover he'll be working as a security guard for a warehouse full of children, some as young as his own, separated from their families at the nearby Texan border.  The steady paycheck, however, outweighs Martín's misgivings—until a strange epidemic grips the facility, and Martín faces a moral reckoning. Stark and propulsive, Tender Age joins Brant’s Grounded (Studio, 2014) as a play about living at the edge of your ethics.

The Arkansas Repertory Theatre has announced a return to in-person programming with its 2021 “Rep Outdoors” series. The series will feature two full productions and a concert in produced partnership with the City of Little Rock.

“If the pandemic has taught us anything, it’s how much we all crave being out in the world and sharing experiences with our families, friends, and neighbors,” executive artistic director Will Trice said in a statement. “That’s exactly what live theatre provides, and these immersive productions give us the chance to enjoy our city’s beautiful community spaces in a whole new way.”

The series will begin with the play Marie and Rosetta by George Brant, featuring the music of Sister Rosetta Tharpe, a native of Cotton Plant, Ark. The play follows Tharpe’s first rehearsal with protegé Marie Knight as they prepare for a musical tour. Steve H. Broadnax III will direct. The production will run July 13-Aug. 1 at War Memorial Park.

The Prince of Providence, written by George Brant and based on the Mike Stanton book of the same name. Taibi Magar will direct this revival of Trinity Rep’s 2019 production about Providence’s deep and complicated relationship with their charismatic but corrupt former mayor Buddy

George Brant's Into the Breeches! will be featured in Northlight Theatre's 2019-19 season. It runs from May 9th to June 16th.