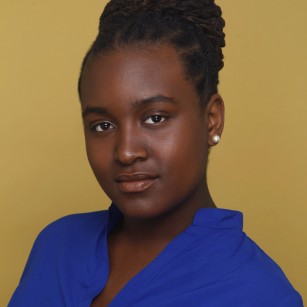 Phanésia Pharel is a Haitian-American playwright who is currently focusing on the divine metaphysical dilemma of Black and Latinx girlhood. Generally, her plays span revolutions, islands, and Afro-Futurism. Thanks to City Theatre Miami, she discovered her love of playwriting at fifteen years old. Her first play, Penelope, was selected as one of four in the nation to be workshopped at the International Thespian Festival and was subsequently published in Dramatics magazine and by Samuel French. One of her favorites, Shovel Me Away, was produced at Micro Theater Miami and received the Best Of The Best 2016 award. Her monologue, My Kid, My Life, appears in the 2015 City Theatre anthology.

During her time at Barnard College of Columbia University she won four literary prizes. Recent success includes her play And Other Dreams We Had which was a finalist for the City Theatre National Short Playwriting award and was selected for Smith and Kraus Best Plays of 2020. Phanésia was also named a Semi-finalist for the 2021 Blank Stage “Future of Playwriting award”, Semi-finalist in the 2021 Bay Area Playwrights Festival and a Finalist for the 2021 Jane Chambers Feminist Playwriting award. She has developed several pieces with Conch Shell Productions and works as a Teaching Artist for ViBe Theater Experience. In 2020, she was Artist in Residence for New York Stage and Film and a National Young Playwright Residency for the Echo Theater Company of Los Angeles. At the moment she is under commission by Thrown Stone Theatre and is a member of New York Stage and Films NYSAF group. Last but certainly not least Phanésia is a proud member of the Dramatist Guild of America.

Core Apprentice Phanésia Pharel has been named as a finalist for the The Jane Chambers Award for Excellence in Feminist Playwriting for the play Black Girl Joy. This award recognizes plays and performance texts created by women and genderqueer writers that present a feminist perspective and contain significant opportunities for female performers. This annual award, administered by the Women in Theatre Program of ATHE, is given in memory of lesbian playwright Jane Chambers, a major feminist voice in American theatre.