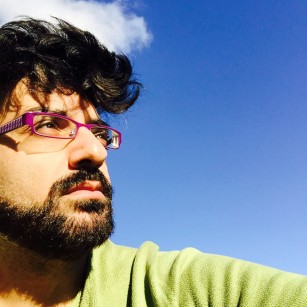 I was raised in a Christian and Muslim household by a Lebanese-Armenian mother and a Pakistani father. My entire core family are survivors and inheritors of three of the worst cultural moments in history: The Armenian Genocide, The 1947 Partition, The Lebanese Civil War. I am also a survivor of a war which is how I ended up in America.

Sometimes the two themes intersect. I reveal risky truths by re-familiarizing the familiar through the unfamiliar. I examine how truth and untruth, reality and falsehood, reason and unreason battle it out in an effort to build bridges between communities and countries.

These narratives come out of my status as a 1.5 generation child who is neither fully in the East nor fully in the West but who has carried all the ideals and cultural mores of the East while being fully enculturated in the West. I am a prime example of what it means to live on a cultural hyphen.

I am dedicated to completely and utterly subverting and dismantling one-story culturism that has been created by the Dominant Culture. The media, in all its forms, is responsible for creating to many social and racial problematics by continuing to rehash tropes and stories that have limited Other Cultures, and, at worse, ignore them completely. And when people only see these narratives the begin to see them as the only truth; and this applies to White and Minority communities. I've seen these same narratives shape my family's perception of other minorities and the greatness of America. My role is not to deny or erase those narratives but to create a more pluralistic view of my cultures and communities. I want to break people's perceptions of what they think my people are.

Three Syrian sisters, separated by war, journey to find one another across time and place. The eldest runs to join freedom fighters, finding new purpose while mourning the disappearance of her sisters and fiancé. The middle sister escapes to America and becomes a social media justice warrior criticized by Western Halal Policing and constantly pulled to find her missing sisters. The youngest is left behind to survive, eventually finding herself in the sights of the al-Khansaa female honour brigade, transforming into a malevolent leader. Although all three sisters are unified in their want for change, their personal and political differences tear them apart to devastating consequences when they finally reunite on a battlefield.

Inspired by women soldiers fighting against ISIS throughout the Middle East and the mythical Gorgon sisters, this hybrid theatre play examines the current crises raging through the Middle East through the eyes of those living it. Past and present, old and new, and tradition and modernity combine to examine contemporary representations of women in Middle Eastern culture.

Montana native George Berri is a national sports sensation, beloved hometown hero, and one of the NFL’s best players. But he’s about to create a perfect storm of personal, professional, and political conflict as he wrestles with the decision to reveal who he really is at the Super Bowl. He wants to tell the world he's an Arab-Muslim by praying during the national anthem. The costs of his choice may be more than he bargained for. FIRST DOWN is the first in a triptych of Muslim plays examining crises and questions of identity and faith in modern America.

Widowed Edith is a hoarder. She doesn’t think there’s a problem, but when the city of Boston sends her an order to clean-up or vacate, she is forced to come to terms with some harsh realizations. Unfortunately, that includes the well-intentioned, but meddling, Dr. Meredith who drags Edith’s estranged children into the situation: Beth, a volatile self-abuser, and David, a socially awkward germaphobe. She’s got a weekend and all the odds are against her.

Do revolutions truly change anything? After 13 years, Abdul-Rahim is released from captivity. Driven by the memory of his wife, he must find his two children, Qila and Mar, now young adults struggling to survive in the bleakest of refugee camp conditions. But the past cannot leave the present behind and screams for revenge: A blood oath must be paid by the parent or the child. Inspired by the current global refugee crisis, this new play examines the costs of personal freedom and familial obligation.

A searingly brutal examination of sexual awakening in people with disabilities. A family’s fight against normalcy is brought into question when a cure for Down’s Syndrome is announced. To what lengths will a mother go through to ensure her son has a ‘normal’ life? Can a loving, but absent, father keep pretending his son is just like everyone else? And when an older brother ushers you into manhood in the most misguided way what will be the aftermath of your newfound knowledge? Sam has all the possibilities and all the odds stacked against him. It’s too bad no one has asked what he wants.

Reeling from the death of her husband and the recent loss of her son in the Iraq war, Susan Davis is confronted with a surprise visitor at her doorstep – a young Iraqi girl named Lena who is more connected to her son than she could ever imagine. Not even her best friend, cookie-baking Jesus-loving Gloria and her wise ass daughter Anne-Marie, can avoid the tides of change as West meets East in sleepy Panama City, FL

Luke and Issa have found a friendship in the middle of an occupation war. Along with Issa’s twin sister, Hayat, the three find comfort, security and a sense of family again. But as the insurgency grows, their triangle is tested to the limits. What is the price of friendship forged in wartime? And how far will they go to find their freedom?

"History is not the past. It is the stories we tell about the past." - Grace Lee Boggs. An ode to the Armenian Genocide, Forgotten Bread is the volatile, and sometimes humorous, journey of a Lost Son trying to uncover his family's past and reclaim his cultural identity. Past and Present collide and melt into one another as he descends further down the rabbit hole of life, death, and survival pushed along by family secrets and historical truths. How can you undo the forced memory loss of survivors guilt to find your place in a world that has forgotten your people?

A visceral look at the violent reality of WW1 trenches as seen through the eyes of two unlikely soldiers: Simon, an ex-pat raised in India, and Buck, a nationalist Irishman. This new play unveils the hidden and forgotten troops of the war and their personal struggles in a time of great upheaval and change. How can you survive the war when you're not sure if you can survive your trenchmate?