Tell us about The Absence of Weather.

On May 22, 1949, James Forrestal became the highest-ranking U.S. government official ever to commit suicide, throwing himself from his hospital window when he saw invading Russians. Forrestal saw himself as a modern-day Ajax, the invincible Greek warrior whose greatest enemy turns out to be himself. Forrestal has become for me the tragic face of American history. I wanted to write an epic play about this leading architect of the Cold War, putting the audience in Forrestal’s mind during his final days, not just to understand the man’s tragic downfall, but our own collective madness.

In addition to The Absence of Weather I'm working on Inappropriate Sexual Relations, a dark comedy about an older actor who pursues a relationship with a much younger actress. Perhaps, these plays aren't so different. My band is working on a best-of compilation, and it was fun to look back at the last five years of making weird music.

I am inspired by a lot of music and I often make specific playlists for different projects. I did a lot of writing to the music of Ben Frost and Ian William Craig the past few months. I get inspired on public transportation a lot, which is good since I spend a lot of time traveling.

I am looking forward to seeing Beckett's short plays and Ivo van Hove's Angels in America at BAM. I'm also looking forward to the new season at Rattlestick Playwrights Theatre, especially the new plays by Sheila Callaghan and Keith Josef Adkins. I am excited to be in rehearsal in Boston with director Bevin O'Gara and in New York with director Adam Fitzgerald. It's going to be another busy year and I am I am definitely not complaining.

I like plays that involve me in an intimate experience, that challenge me, and that strive to be unforgettable. F**k irony.

About The Absence of Weather

World War II. By 1949, he has been forced out of office and committed to Bethesda Naval Hospital, convinced that Soviets are infiltrating the U.S. government. As the hospital staff struggle both to treat and protect their patient, Forrestal worries that he has betrayed those he loves in pursuit of ghosts. An American tragedy about the wages of fear.

Ken Urban is a playwright and screenwriter based in New York. His plays have been produced and developed at Summer Play Festival at The Public, Donmar Warehouse (London), Epic Theatre Ensemble, Studio 42, Theatre @ Boston Court, Williamstown Theatre Festival, Playwrights Horizons, Irish Rep, Primary Stages, kef productions, Stable Cable, and The Huntington. During the 2013-14 season, The Awake opened at 59E59 Theatres in August, starring Maulik Pancholy from Weeds and 30 Rock. The New York Times named the show a Critic’s Pick and it played for a sold out run. The Correspondent was part of the season at Rattlestick Playwrights Theatre. The production, directed by Stephen Brackett (Buyer and Cellar), featuring Thomas Jay Ryan, received four stars from Time Out’s Adam Feldman and was lauded by Joan Rivers in the New York Post. In 2015, A Future Perfect will receive its World Premiere at SpeakEasy Stage Company in Boston. Awards include the Weissberger Playwriting Award, Huntington Theater Playwriting Fellowship, Djerassi Artist Residency, Dramatist Guild Fellowship, and MacDowell Colony Fellowships. The feature film adaptation of his play The Happy Sad, with a screenplay by the author and directed by Rodney Evans, premiered at Frameline and OutFest. The film screened at over twenty-five film festivals in the US and abroad, with theatrical releases in New York and Los Angeles. The film is available on Netflix and iTunes. His plays are published by Dramatists Play Service, and The Awake will also appear in an upcoming issue of TheatreForum. He plays in the band Occurrence and their latest album D E C K S came out in early 2014. Their releases are available from Insound and Bandcamp. 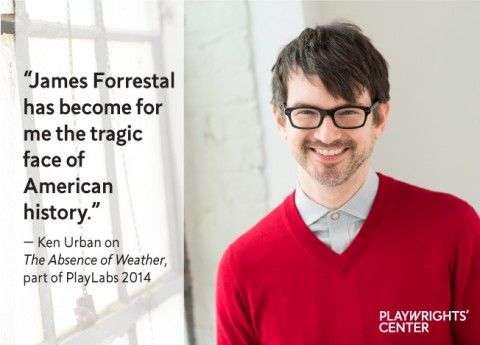